I’m not a Christian, but I have no objections whatsoever to Johnny Hart doing Jesus-themed cartoons, really. Especially this weekend. Hart loves Jesus, this weekend is the holiest in the Christian calendar, so: knock yourself out. Bonus points for not hating on Darwin or the Jews.

What I object to is Johnny Hart doing Jesus-themed cartoons that make absolutely no sense. Is “stood on the truth” an idiomatic expression that anyone has used, at any time, ever, such that it would justify the word “truth” being carved, in faux Roman capitals, on an ant-sized podium in the middle of bleak ancient/post-apocolyptic hellscape, in order to set up this joke (and I’m using the term “joke” loosely)? In case you had trouble following that sentence, I’ll supply the answer to the question, which is: No.

(UPDATE: Er, so it’s been pointed out to me that “truth” is in fact the last word in John 1:14. Apparently I looked up that verse, scanned it, didn’t see the word “truth”, and never got to the end. I’m as bad as Jeffy Keane (see below)!)

But hey, at least he managed to keep his eye on divine, soul-saving ball for the whole strip: 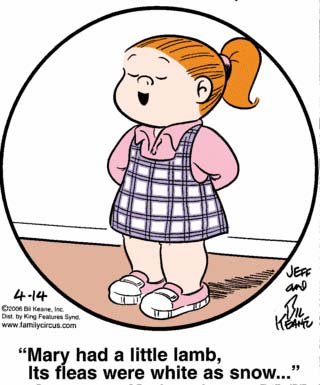 It looks like this one started out as being Jesus-themed (“Mary”, “lamb” — lamb of God!) but then fell prey to the irresistible pull of an adorable malapropism. I’m pretty sure that people would read the Bible more often if it featured less smiting and thundering against hypocrites and more little kids mispronouncing words in hilarious ways.