“Whale”? Did Mary just sit through a grueling week-long dinner dominated by savage passive-aggressive battles over eating and weight loss and just think “whale”? OH NO SHE DIDN’T! That skinny old biddy has crossed the line: even if it was just in thought balloon form, the sarcasm quotes around “whale” make sure that we know all about her smug superiority.

I’m looking at this strip again and just noticing that Lou is continuing to attempt to force-feed his hapless wife: he’s got a death grip on the back of her neck and he looks like he’s doing the “airplane” game with that spoonful of off-white mush, much as you would with a recalcitrant infant. Even creepier to me is Kelly’s attitude, which seems to boil down to, “Ha ha, that husband of mine, he’s an angry control freak who refuses to allow me to have any will of my own! Whaddya gonna do?” 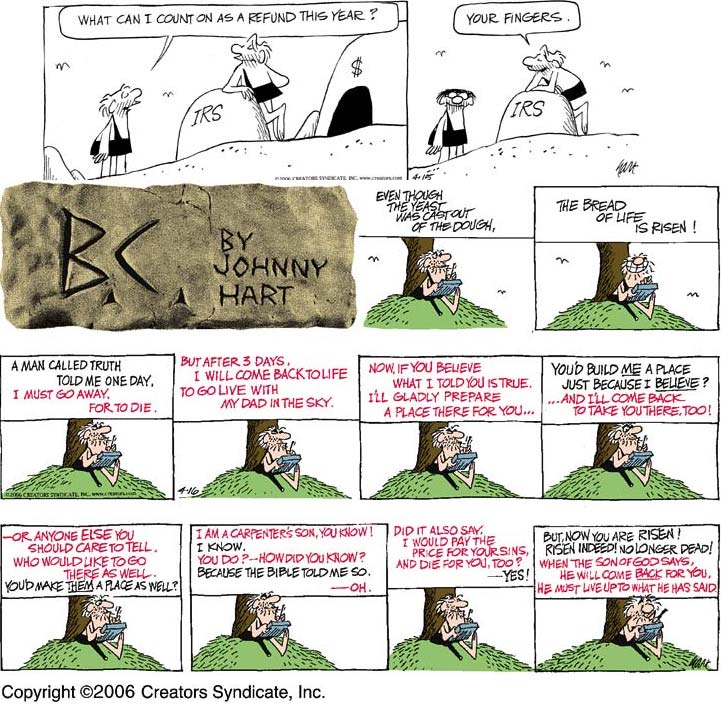 God and Mammon met head-on as B.C.’s Easter weekend took a Holy Saturday break for some good-old fashioned tax humor. I’ll ignore the joke of Saturday’s strip to point out that the keen-sighted blonde caveman dude in panel one (Peter? Thor? Does anyone actually know or care?) is suddenly transmorgified in panel two into dark-haired, glasses-wearing Clumsy, who is one of the easiest characters in the strip to recognize. I’m sure there’s a totally legitimate reason behind the miraculous transformation and I encourage you to post your ideas about it in the comments.

Easter Sunday we get the real goods, though. I think I caused some confusion Friday when I praised Johnny Hart for not hating on Darwin or the Jews; I meant that he didn’t do so in that particular comic strip, not that he never did. However, since I spent the weekend chowing down on a lot of unrisen matzo bread, I have to admit that I found the opening two-panel joke a bit unsettling.

The rest of the strip makes use of a technique found in some New Testaments, in which everything that’s a direct quote from Jesus is printed in red. This is, I suppose, intended to help us figure out when we have switched between the two speakers in this dialogue, though I’m intrigued that a convention used to highlight what most Christians believe to be the literal word of God is here used in a second-rate Dr. Seuss pastiche in the Sunday comics. When I showed this to Mrs. C., she asked, “Is this supposed to be funny?” I answered with a venerable Simpsons line: it’s not ha-ha funny. 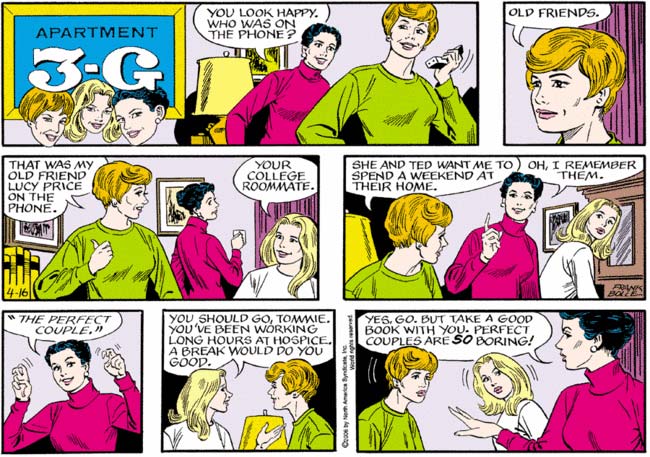 On a happier note, Apartment 3-G continues to tease us with he prospect of a Tommie-centered storyline. Either wacky adventures await her (and us) as she journeys into Lucy and Ted’s den of boring lovesickness, or it’s just a device to write her out of the strip for the next few months while Margo and Lu Ann do more interesting things. As much as I want to see our favorite redhead in the spotlight, I hate to see the Margo not get her due: I love the first panel in bottom row, where she’s air-quoting so vigorously that she looks like she’s about the sprain something. The use of quotes in the word balloon to match her little bunny-ear finger gesture really drives the point home. Much as I love Margo, though, I am of course one half of a perfect couple, so I’m going to choose to take offense to her decree in the final panel.