That’s right! I couldn’t settle one just one, so I’ve got four comics for today! I hope this is storing up goodwill against those days when I don’t post anything at all.

Tommie’s secret thought balloon in panel three: “Ugh … Lu Ann’s self-actualization … so boring … must pinch neck … to keep myself awake …” Fortunately, she’s a medical professional, and won’t accidentally cut off the bloodflow to her brain and collapse in a heap on the floor. Not that it would stop Lu Ann from nattering on.

Yeah, go ahead, show him the address. After all, he’s a priest! And we all know that they never do anything disreputable or pervy. No sir.

(So I’m going to hell for that. But I was going anyway, so I might as well enjoy the ride.) 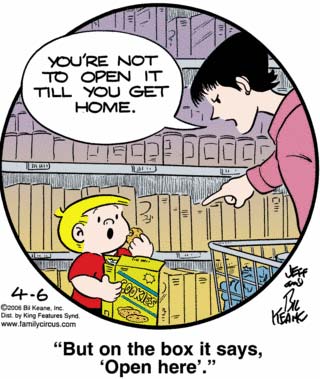 So this is the cookie aisle, right? And all the boxes are arranged on the shelf so that their fronts, with their lovingly detailed close-up pictures of delicious, delicious cookies, are turned so as to be largely invisible to hungry shoppers, while their sides, with detailed information about the massive amounts of fat, industrial chemicals, and animal byproducts in said cookies, are prominently displayed for all to see. Plus, the boxes are all a muted brown. Where do these people shop, the Depressing Store?

Also (and this next paragraph is an extended shout-out to my professional linguist homies over at the Language Log, who have linked to me several times despite my near-total absence of linguistics content), I’ve always found the verb construction Mom’s deploying here pretty stilted and weird. It’s a verb of being governing a negative infinitive, which makes it … well, hell, if I knew that, I’d be writing “I analyze syntax so you don’t have to,” or, you know, the Language Log, instead of this thing. I reached back a decade and rummaged around my half-remembered memories of Latin for a while and came out with the phrase “hortatory subjunctive,” but I don’t think that’s right. Anyway, it does have a certain advantage in that saying “Don’t open it until you get home” would make her look pretty dumb, since he’s already opened it. This way she gets to make a general statement of fact without having to either ignore or explicitly acknowledge the reality of her greedy, gobbly, smarmy little brat of a son.

I’m going to hazard a guess that a year from now the Rap-Dog is still going to be fetching menthols and Mello Yello for his overbearing trailer-bound Momma. Either that or he will have killed and taxidermied her, though even then he’ll probably still be alternately cowering from her wrath and having sullen arguments with her in his mind. Come to think of that, he might very well be doing that already.

It’s hard to stay mad at a woman whose shirt is decorated with tasty Doritos, though. Mmmm … Doritos.