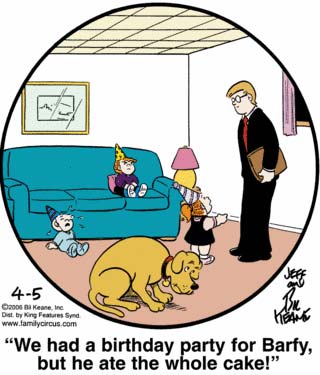 PJ’s squalling. Jeffy’s furious. Barfy looks like he’s about to live up to his name. Yep, dad, this is why you became a workaholic. The less time you spend under that hideous drop ceiling, the better.

For a while, I thought that the vertical line near our patient’s posterior was supposed to be his buttcrack, which we were seeing thanks to some cubist-style unrealistic perspective, but after some consideration I think it’s just the edge of his hospital gown, and we’re just seeing sidal cheek nudity — naughty, but not offensively icky. It’s a delicate balance when you want to do a rear end gag in a family comic strip. I imagine the artist and the syndicate going back and forth on this one until there was just enough tuckus showing to make the punchline clear, but not so much as to give the bluehairs a case of the vapors. They were ultimately successful, but, sadly, all that effort was still put out in the service of a joke about Jamaal’s ass.