Tune in for future installments of Sally Forth’s alcohol-fueled blackouts and ancillary hilarity:

I’m not familiar enough with the rich Judge Parker backstory to know whether Abbey was born to fabulous wealth or if she came by it by marrying (or just shacking up with? I can’t keep it straight) Sam Driver, but she clearly has a lot to learn when it comes to ordering her henchpersons about. She’s got the part where you make them dress up in ludicrous uniforms right, but she doesn’t really know how to talk to them: 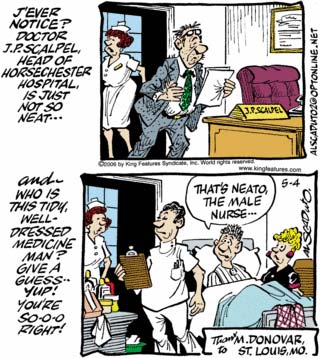 This panel ignores the tremendous pressure anyone named “Neato” is under to be tidy. As if four grueling years of male nursing school weren’t enough!

OK, but see, this is just totally insane.