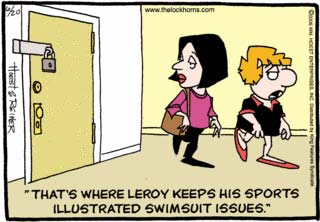 So, just in case you were wondering, the Lockhorns’ marriage: still a nightmarish, soul-destroying prison from which there is no escape. As usual with this feature, once you start unpacking what’s going on, it’s hard to decide which aspect of this depressing vignette is the most heartbreaking:

“I’ve heard about it … that would make a good story! Say, did you know that the Chinese often poach tigers for their penises in order to make aphrodisiacs? You know, Mark, whenever I think of tiger penises, I think of you … tiger.”

I’d love to think that my invocation of notorious Trailian temptress Kelly Welly last week caused her to appear, but really, if we’re going to reach the heights achieved by the petnapping hillbilly storyline, it was pretty obvious that we needed some sex appeal, stat. Notice how courtly Mark is about pulling Kelly’s chair out for her. Of course, behind her back, he’s not so chivalrous.

Here are my alternative suggestions for what Lucy should have said. Clip ‘n’ save ‘n’ memorize in case you’re caught in a similar bout of illicit snogging.

Meanwhile, Seth (if that is his name, which I doubt — if Lucy even knows his name, which she probably does but it wouldn’t surprise me if she didn’t) is not at all fazed by Tommie’s attempt to be all like, “Hey, buddy, your lady’s a cheatin’ ho!” Frankly, I don’t think he’s even listening to her. Look at the brutish, criminal face framed by that flattop — his eyes never leave Lucy’s face, and all that’s running through his head is “PRETTY PRETTY PRETTY SMOOCH SMOOCH HUBBA HUBBA.” Which is pretty much why Lucy likes him.

By the way, the Finger Quotin’ Margo contest is now closed. I will post all the entries tomorrow sometime, if all goes well, and announce a winner … uh … as soon as I figure out how exactly to judge all the totally excellent entries I received. Geez, what have I gotten myself into?