If there was ever a time in the thirty-year history of Crock — a comic strip about a group of Western military men engaged in a seemingly unending mission somewhere in the Arab world — in which it ought to by right match up to the geopolitical moment, this is it. Unfortunately, and yet to the surprise of nobody, it hasn’t lived up to the challenge. One doesn’t expect Ph.D.-level theses on interactions between Western and Islamic culture, but one does expect someone identified as a “nomad” to look less like a parody of a cold-war era spy, complete with totally-inappropriate-for-the-desert all-black clothes, and more like, oh, I don’t know, a middle-eastern nomad. Surely a picture could be found in a book or magazine to serve as a guide. Interestingly, the artist may be somewhat embarrassed about this: in panel three, the nomad is forced almost completely out of the frame, giving up screen space to a lovely palm tree. 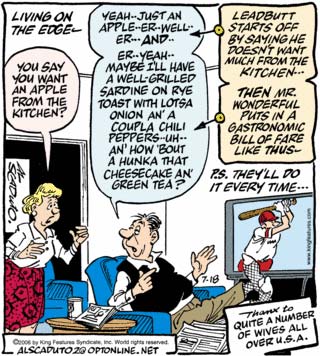 Some of you commentors have reacted to this TDIET with disparaging comments along the lines of “What the hell is wrong with this guy” and “Nobody does this ever.” You people don’t understand that you’re seeing a master at the top of his game. Look at how he diagrams the entire joke for you along the right of the word balloon. In the hands of a lesser artist, revealing how the process works like this would be an open invitation to host of imitators, but even if you see all the individual pieces of the puzzle, you can never fit them together in that oh-so-special TDIET way. It’s like the time I saw Penn and Teller and they did a trick twice, the second time explaining what they were doing as they were doing it, and you still came away amazed. The “P.S.” at the end is just a little reminder that you that this, in fact, is how we roll in They’ll Do It Every Time. Oh yeah!

Ha, ha! You see, in the west, we’d use “sticks and stones,” but in the east, they’d use “bamboo and pebbles.” Because, see, they don’t have trees in China, just bamboo. Lots and lots of bamboo. And pebbles are … um … zen … oh, Christ, this strip is just totally appalling to me.