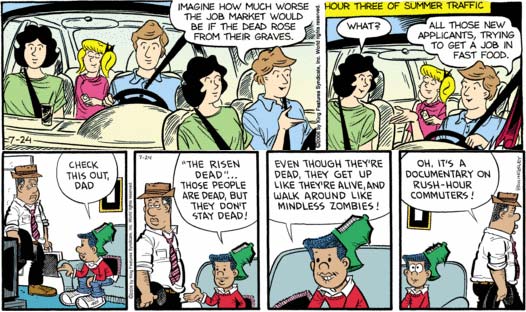 Ah, yes, summer’s here, making the decaying flesh of commuting zombies all the more pungent, so this confluence of jokes seems obvious. At least Ted’s loopy Ted-ism is supposed to not make sense. Curtis, on the other hand, goes from biting his lower lip in anticipation of zombie carnage to making the universal face from Warner Brothers cartoons caused by swallowing alum, which is supposed to represent — well, I don’t know, exactly. Either it indicates that he’s taken his father’s caustic comment to heart, or that he realizes his dad has, like Ted, gone around the bend. Fortunately, Hilary is grooving to her iPod and can’t hear her dad taking the next step in his slow descent into madness.

This strip would be a lot funnier if Crock’s artist were capable of accurately drawing a pretty girl.