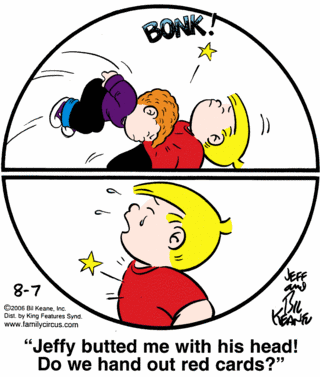 I’d like to think that little Jeffy is finally asserting himself violently, like a Frenchman whose honor has been insulted, while Billy is suddenly whining like a little baby Italian. But longtime readers of this feature know that Jeffy has neither the cojones to take on his brother’s sternum with his forehead nor the leg strength to take the flying leap depicted in the top half of this panel. The only logical conclusion is that he once again is a pawn in someone else’s game: presumably some other Keane who has a gripe with Billy (Mom? Dad? Dolly? Barfy?) has hurled Jeffy at the offending towhead.

Speaking of red cards, if Tommie doesn’t do something really dramatic tomorrow — I’m thinking suicide, or at least some sort of ritual cutting — then I’m citing her for drama. “Sorry, Professor, I wanted to ask if you’d watch Crossing Jordan with me last night … but now it’s too late! That is, at least until next Tuesday at 10 p.m., on NBC!”

By the way, panel two features a rare example of the King Features coloring monkeys actually making up for a defect in the original drawing. That cool cat Ari somehow lost his mustache between the first and second panels, making him look all too much more like Mary Worth’s Professor Ian “Chinbeard” Cameron. In an attempt to maintain facial hair continuity, the colorists didn’t daub his upper lip with “caucasian peach” in panel two, leaving him looking like he has one of those icky “got milk?” mustaches.

Something about Rex’s bolded-italicized phrase in panel one makes me want to repeat it over and over again, Zippy the Pinhead style. It sounds like it could be a rhyming catchphrase from a Jesse Jackson speech. “Your life was an escalating deception … as you tried to create a dishonest perception! Now you need to make a whole-hearted correction!”

In a comment in an earlier post, faithful reader Laura noted that the little blurb at the top right of the first panel (“As Rex begins to walk away, Troy stops him!”) is, in her words, the “GAYEST. OMNISCIENT NARRATION BOX. EVER.”, which made me chuckle. What I’m wondering is how this so-called omniscient narration box failed to figure out that “Troy”‘s name is actually “Adam,” since everyone in the strip, up to and including Abbey the Wonder Dog, has by now been clued it.

I suppose it’s strictly accurate to say that it gives a whole new meaning to the phrase “rockin’ and rollin’.” Since nobody has actually used the phrase before, any meaning you attribute to it would be “new.”