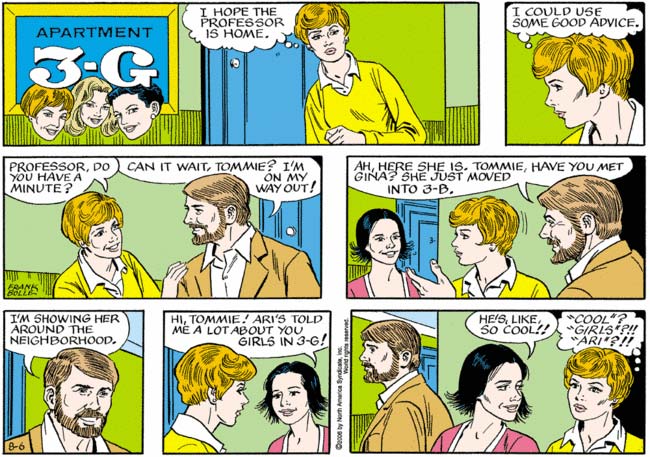 I think it’s pretty clear that Tommie’s going to get her mind blown, over and over, until she begs to never ever get a storyline of her own again. I admit that it’s pretty shocking that a woman in her late twenties might call a man in his early fifties by his first name — if you live in 1954. Otherwise, I got nothing on Tommie’s total bafflement. Maybe she’s devastated that her longtime partner in sexless chastity has a non-platonic date with someone. Whatever it is, I hope we’re treated to a whole week of Tommie word-ballooning random words in quotation marks and out of context. 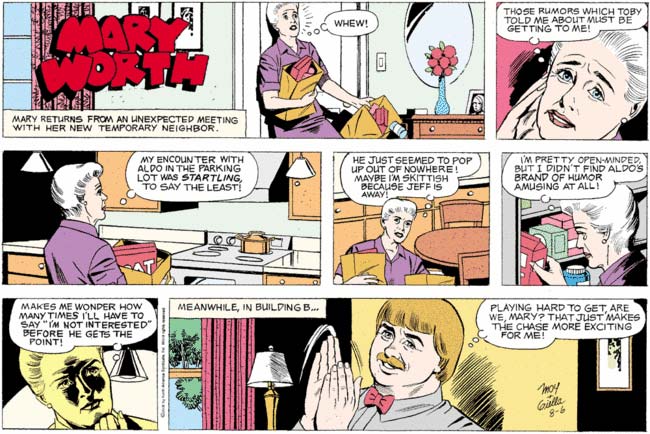 “I’m pretty open-mined, but I don’t find Aldo’s brand of stalking amusing at all!” Personally, I find Mary, that champion of suburban condo conformity, describing herself as “open minded” to be quite amusing. Tell the ladies at the downtown women’s shelter all about your open-mindedness, why don’t ya?

Since I actually am open minded, I find Aldo’s brand of humor freakin’ hilarious. Particularly risible is his maniacal and heavily-motion-lined evil hand-rubbing in the final panel. Or maybe he’s so turned on by the thrill of pursuit that he’s doing some spontaneous hand-jiving.

There’s absolutely nothing about the humor content of this strip that demands that it be narrated by girls in bikinis, but I’m gradually learning that the main role of the granddaughter in this feature is to distract from the lame-o writing by wearing something skimpy.