Is there anything grosser than Anthony harkening back to one of his and Liz’s furtive almost-certainly-didn’t-get-to-second-base teenage make-out sessions as Liz describes what it felt like being overwhelmed by the flood of memories of her near-rape? Well, maybe it’s the fact that just before said flood of memories arrive, we get that patented icky FBOFW close-up, where an ostensibly pretty girl looks like she’s been daubed with layers of makeup in preparation for a mall-studio glamor photo. Anyway, to summarize: Ew. 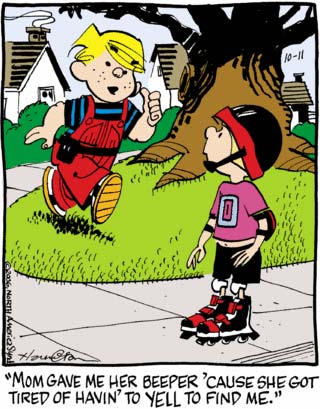 The first thing that entered my mind upon reading this strip, as I’m sure was true for all of you as well, was the immortal quatrain that concluded Ice Cube’s 1993 classic, “It Was A Good Day”:

Drunk as hell but no throwin up
Half way home and my pager still blowin up
Today I didn’t even have to use my A.K.
I got to say it was a good day

Ah, Dennis, so many opportunities for adventure your beeper opens up to you! All of which involve drugs. Because pretty much everyone other than drug dealers has gone in for cell phones now. Cell phones, Dennis the Menace scribes. Take a note. They’re like these little phones that you can take around with you wherever you go. Been pretty omnipresent since the late ’90s or so. No, no need to thank me.

As Dennis continues to be less and less menacing, his constant companion and foil has been consistently portrayed as even feebler in order to leave the impression that Dennis still has something of an edge. Has poor Joey ever looked readier for the short bus than he does here today?

People say that Jack Elrod can’t draw people very well. I say that never has the majestic American mullet been portrayed with the attention to detail and depth of feeling on display here.

I’m deeply intrigued by the suspense built up by the nonspecificity of “Are you thinking what I’m thinking? Yeah, let’s do it!” Here’s my idea for the missing fourth panel: Molly is wearing an adorable bonnet and drinking tea out of a tiny cup, sitting at an itty-bitty table with a bunch of stuffed animals, all of whom also have teacups in front of them. Orange Shirt and Mullet Head stand nearby, taking pictures for their novelty Web site and squealing in girlish delight.

Sometimes in a strip you see the gears begin to shift and new directions begin to open up, and you have to ask yourself if you’re willing to go down the new trails that are about to be forged. So if you’re wondering if I’ll still love Mary Worth if it becomes less about Mary meddling in the lives of others and more about Ian saying wildly inappropriate things sotto voce in delicate situations, the answer is: Yes. Yes I will.