Oh, come on now: You know you’ve all idly thought about faking your own death, if only to see how people would react at your funeral. I think if I were Aldo — whether I was looking down on this mortal coil from my new home on a fluffy white cloud, or very much alive and hiding in the bushes, chortling with glee — I would derive a great deal of satisfaction from the sudden case of the squirmies that has beset our fearsome foursome here. It’s all the more obvious and awkward for them, considering that they seem to make up half the funeral party.

Not that we should expect the average tweenager to have an elaborate life plan in place, but I’m somewhat disturbed by Curtis’ two potential scenarios for getting out of his parents’ tiny apartment: Either he can become economically independent and a contributing member of society, or he can … get married. Speaking as someone who married a homeowner, I say go down path number two, Curtis. It’s a lot easier.

You know, you can be irritated by a comic day after day, but then once in a while you’re reminded why you still read it. It’s been a long time since I’ve heard a put-down as succinct, forceful, and useful in any situation as “Clam up, noseface!” I intend to put it to good use in the not-so-distant future, believe you me. 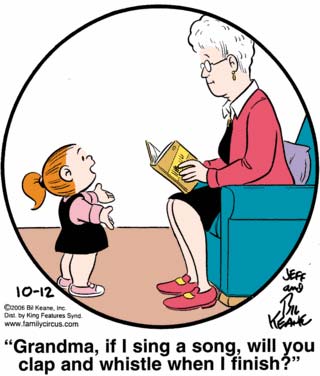 See, this is why I’d be such a lousy grandparent: My response would be, “I don’t know Dolly, is your song going to be any good?”