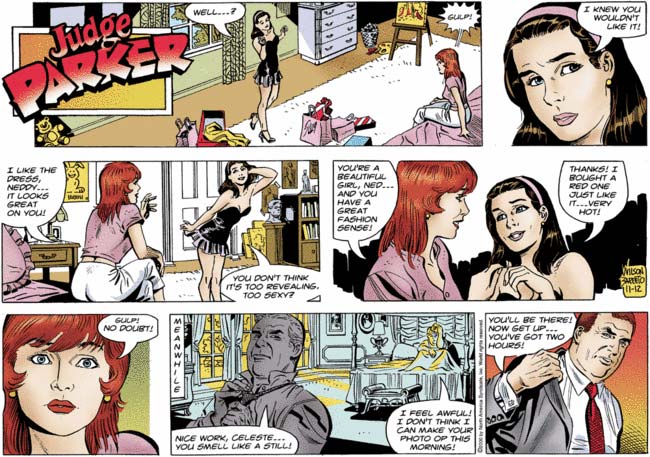 Oh man, Sunday’s pre-“Meanwhile” Judge Parker packs in as much queasy adolescent sexuality as a John Irving novel. The image of Ned sticking out her ass for her mother, and asking “You don’t think it’s too revealing … too sexy?” is somewhat alluring, but mostly horrifying. Abbey’s blatant look of mingled horror and arousal in panel five adds to the squirm. She probably would like to complain about her daughter’s trampy outfit, but realizes that she doesn’t really have the moral authority to do so since you can totally see her buttcrack in panel three.

By the way, Neddy, French women dress in sexy and stylish clothes, not like … that. Prepare to be mocked.

(Incidentally, Abbey isn’t Ned’s bio-mom … and I’m pretty certain Ned was adopted as a teenager. I’m not sure if that makes the underlying tension here better or not.)

Post-“Meanwhile,” the phrase “Nice work, Celeste … you smell like a still!” may be the best marital put-down this side of the Lockhorns. Still, it’s nice that Reggie gave her a full two hours get her drunken mess of a life together enough to get to the press conference. 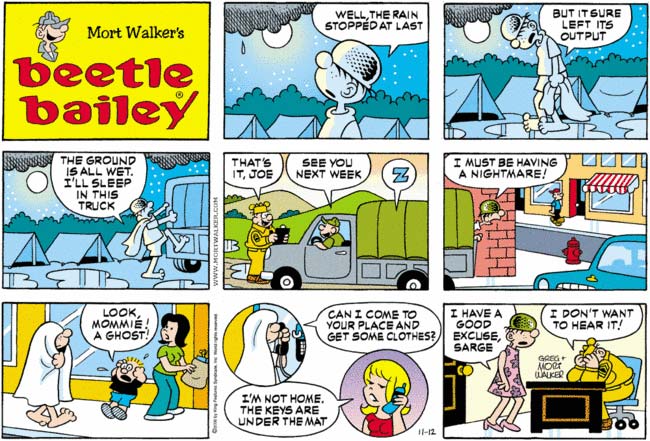 There’s a lot to hate about today’s Beetle Bailey. It follows the weird stumbly, improvised, cumulative-joke rhythm that’s been somewhat typical of the Sunday strips of late. I also wonder what happened to Beetle’s perfectly presentable t-shirt-and-shorts combo while he was in the truck, or why Miss Buxley is the only person Beetle can think of to call in his predicament, or how Miss Buxley could possibly be so femme that she doesn’t own any clothing item that isn’t a dress, or any shoes that aren’t high heels. However, I’d like to reserve the brunt of my ire for the phrase “But it sure left its output,” which has never been and will never be uttered by any speaker of idiomatic English ever. 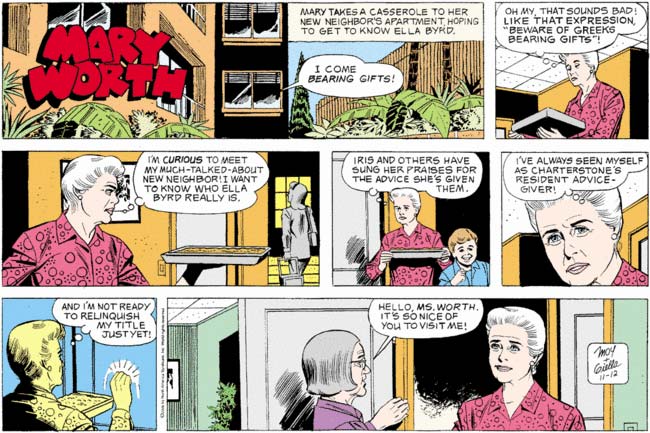 As Mary walks towards her date with destiny, it’s amazing just how rattled she is. First off, in the first panel she appears to actually be practicing her first greeting to her new archrival. In panel three, she looks like she’s sneaking down the hall way, ready to leap around the corner and bash in roller-suitcase-woman’s skull with her pan. But mostly I’m charmed by the look of grim determination on her face, which gives way to an utterly insincere smile in the final panel. Next week is going to be great. 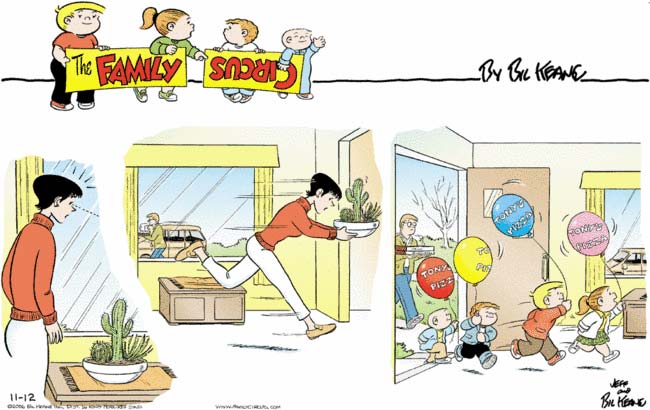 The lesson: You can’t have nice things when your kids are morons.