You know, many once-great works of continuous narrative art reach a certain point where they, for reasons mysterious to us on the outside, feel a need to add an adorable character whom everyone hates. Though this is a move to keep things fresh, it ends up disgusting fans and ruining everything. So, for instance, the Flinstones had the Great Gazoo, and Scooby Doo had Scrappy Doo, and now Curtis has “Oogie.” Except that this is Curtis, so I’m not sure “ruined” is really the right word here.

Wow, Gina is the most socially inept person who’s ever managed to get out of high-school alive. The only thing I can think of is that she’s a serious method actor, and her character was just punched in the jaw before coming on-stage. 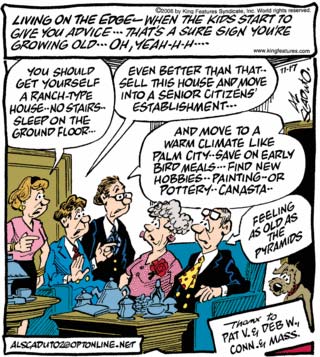 You know, I like to think that I’m a pretty close reader of TDIET. In fact, I probably spend more mental energy parsing its panel every day than 99 percent of the people in this country. And yet I can’t tell you exactly what it means when the narration begins with the phrase “Living on the edge,” as it does fairly regularly. Nothing even remotely edgy happens in the panels that contain this phrase; it’s just the usual litany of insane, petty rants and human degradation. Today is a good example, though it might indicate that Ma and Pa are on “the edge” of death; they certainly have the stunned stares of a couple who are suddenly coming to grips with their own mortality. I gotta say that if my dad were sitting around inside with his eyeglasses up on his forehead, I’d be looking into homes, too.

“Man, if only we had some way to, I don’t know, explosively propel tiny metal projectiles into them, thus killing them! But where would we get such a thing? I guess we’re just going to have to tie them up to death.” 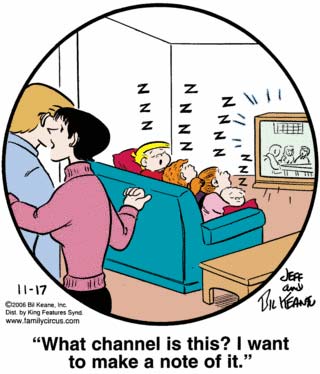