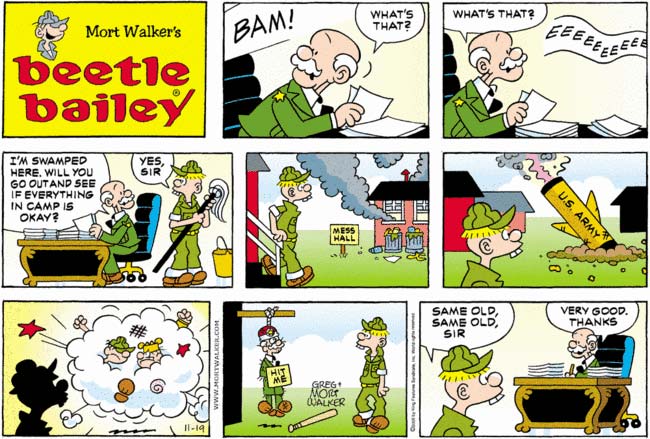 Beetle Bailey is totally divorced from anything actually happening in the U.S. military, as has been repeatedly noted by everybody ever. Today’s strip gives me an intriguing idea, though. What if the reason that Camp Swampy was so unlike the real army is that nobody there was actually in the army? It’s just a bunch of weirdos/re-enactors/lunatics wearing a mishmosh of army uniforms from different eras who have got a hold of some surplus army jeeps and are playing out a bizarre drama for their own inscrutable purposes. The missile in panel five indicates that the real army has finally wind of their little game, and has declared war upon them for impersonating the military and sullying its good name with their rampant incompetence and stupidity.

The General Halftrack piñata is panel seven is just about the greatest thing I’ve ever seen. Since all Beetle Bailey characters are incredibly cartoonish anyway, it’s difficult to portray something that’s supposed to be a stylized version of one of those characters in the strip, so it pretty much just looks like the general’s been lynched by his angry men. 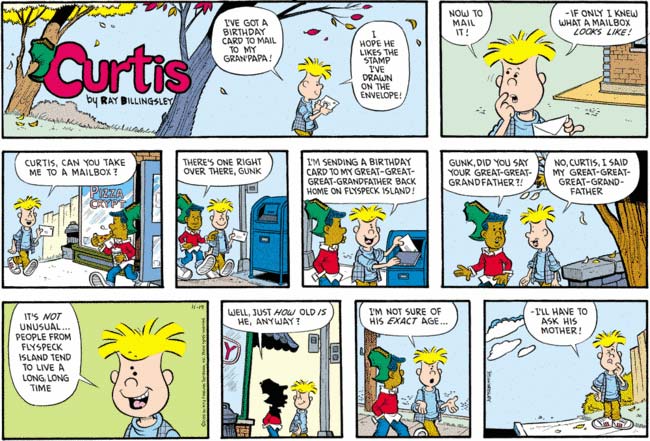 When I first saw this strip without the top two supposedly disposable panels, I was pretty baffled by Gunk asking Curtis to “take me to a mailbox.” I mean, I know he’s from tiny Flyspeck Island and all, but surely he’s lived in the neighborhood long enough to know where the major landmarks are. Panel two reveals the real source of the so-called humor: Gunk is such a wacky crazy foreigner who doesn’t understand our ways to such an extent that he doesn’t even know what a mailbox looks like! Whoo! This, of course, is dumber than a sack of hammers, as is the Curtis convention of one character simply vanishing in the last panel as a reaction to another character’s outrageousness. Poor Gunk never will find that mailbox, but that’s OK, since his hand-drawn stamp won’t take his mail back to Flyspeck Island. God, I hate Gunk. 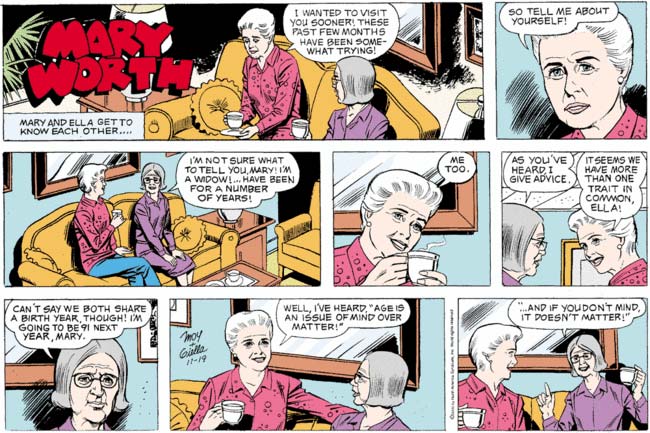 Oh, so they like each other now. How depressing.