Monday and Tuesday comics coming later today, I swear, but to tide you over, I present some troubling evidence sent to me by readers.

First off, faithful reader David was alerted to troubling doings in Mark Trail by co-worker Joe Krocheski. No, I’m not talking about poaching, bear abuse, or wandering beavers; it’s much more sinister than that. Here’s the November 15 and 27 strips: 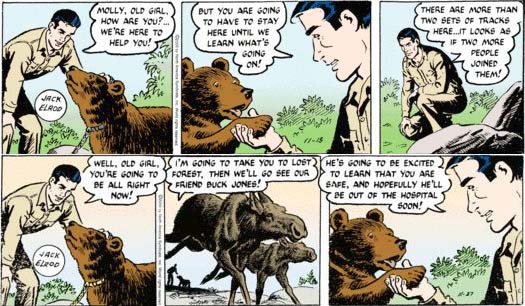 And I thought it was just the plot that was giving me deja vu.

Then there’s the e-mail I got from faithful reader Daijinryuu in regard to Sunday’s Family Circus:

Just within the last week, I stumbled upon a rather horrible, crazy-beyond-the-telling-of-it manga called “The Family Zoo,” which shares rather … striking similarities to this. Dad is an elephant, Mom is a giraffe, the two brothers are a monkey and a lion respectively. The only thing different is that the daughter is being portrayed as an ostrich instead of a snake. Also, Grandpa’s a toilet. It involves bestial incest and, um, toilet use.

He provided the link to download it, which I provide to you, but WARNING WARNING WARNING: it’s really really gross, with the pooing and the coprophagia and the incest and the lion penises and the hey hey. But if you want to appreciate the link-up with the Family Circus, here ya go. Faithful reader Sincere also posted a link in the comments to one of yesterday’s posts, but Daijinryuu pointed it out to me first (not that it’s a race or anything).