Today the Phantom gives you what in the business world they call the “value add”. See, any two-bit superhero can give you explosions and fisticuffs and gunplay and what-not; but with the Big Purple Guy, we stick around to see what happens after the climax. Thrill as the Ghost-Who-Hopefully-Isn’t-Getting-A-Paper-Cut idly rifles through the Doorman’s files! Marvel as he and the freed slaves stand around making idle, awkward small talk waiting for the cops to show up! Look on in wonder as the Phantom gives his cell number and e-mail address to the assembled servants so that they can use him as a reference on their resumes! You’ll pay for the whole seat, but you’ll only need the edge!

You may think that keeping the soldiers at Camp Swampy pumped full of Wellbutrin isn’t the best way to run a military, but if they can’t ever feel any negative emotions, they’ll presumably obey any order, no matter how atrocious, and cheerfully roll forward as an army of smiling, glassy-eyed, remorseless and conscienceless killing machines. One hopes that General Halftrack got personal approval from the Secretary of the Army Francis J. Harvey before engaging in his sinister psychopharmaceutical experiments on his hapless subordinates.

So, Eduardo Barreto’s been handling the Judge Parker art for several months now, and I’m still a fan, but he does seem to shift styles every once in a while, which can be a little unsettling. I guess if the history of soap opera comics is any guide, he’s going to be drawing this for the next seventy years, so he’s entitled to do a little experimenting in the beginning of his reign. Things did suddenly get a lot less shady and more stylized this week. Panel two illustrates the major artistic dilemma for anyone drawing Judge Parker — can you make Sam Driver and Randy Parker look like different people? Today, it’s all about the part in Sam’s hair. 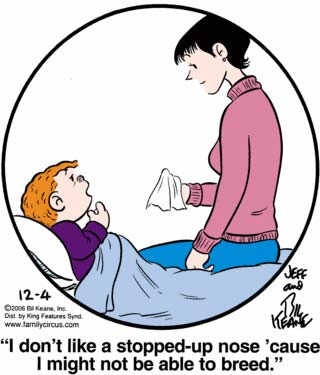