More proof that Archie’s text is created by a joke-generating computer: In what context would any actual biological life form use the phrase “Why aren’t you out there hustling?” The only one I can imagine would be in some ’80s teen comedy in which, due to a hilarious series of misunderstandings, a snooty, stuck-up rich guy who’s never worked a day in his life has to coach a band of misfits to the state basketball championship. Oh, sure, at first they make fun of his patrician patois and attempts to talk “street” — “Fellows, why aren’t you out there hustling?”, “I say, that slam dunk was really quite smashing!” — but then they’d explain to him that in certain semantic contexts “bad” can mean “good” and soon enough they’d come together as a team, win the inevitable slobs vs. snobs title game (against the coach’s alma mater, natch), and learn the true meaning of friendship.

An alternative interpretation: The “coach” is actually Archie and gang’s pimp, and he wants to know why they aren’t out there “hustling” and making him some money. The less said about that scenario, the better, but it’s worth noting that such activity could indeed scuff up Svenson’s floor.

And speaking of the wacky Scandinavian janitor: usually overalls are not the garment of choice for those who want to showcase their trim physique, but Svenson’s are awful tight in the rear end. OK, I’ll stop.

You know, despite all the internal dissension that’s clearly troubling this year’s Milford girls basketball team, I think it’s a safe bet that, like the great strife-torn Oakland A’s teams in the ’70s, the Lady Mudlarks are going to do just fine in the standings. Any team that has a player for whom an over-the-shoulder, no-look fling at a basket more than thirty feet away is an “easy two” should take care of the competition without too much fuss.

People criticize the Gil Thorp art, but I’m kind of in love with the strip’s crowd scenes. I like the expression on the faces of Bald Trench Coat And Black Turtleneck Guy and Person Of Indeterminate Gender Wearing A Fur-Trimmed Jacket And Hat Even Though He Or She Is Inside. “Hey, Overbearing Basketball Mom, we’re trying to enjoy the game here, so shut up! Also, if you’re trying to amplify and/or direct your voice, putting your thumbs behind your ears is probably not the best technique.”

Oh man, I refuse to believe that the Judge Parker gay-baiting election storyline, which only got started in late August, can possibly be over already. I mean, this is Judge Parker: five months of real time is equivalent to, what, twenty minutes? I’m assuming that by “best friend” Sam means Reggie’s doughy lawyer Roy, who, if there’s any justice in this world, we’ll get to see on the business end of a Celeste-wielded microphone when the beans are inevitably spilled. 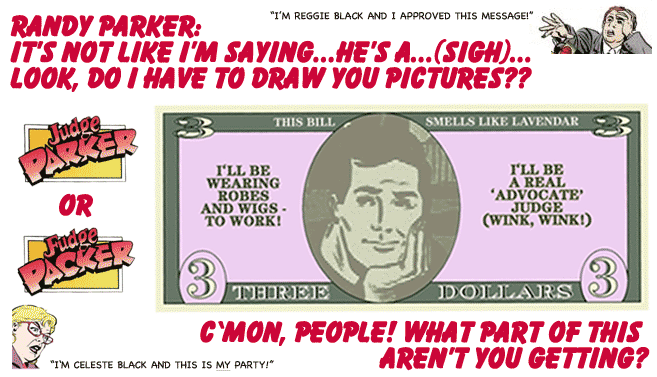 Any Jungian will tell you that dreams are not meant to be taken literally: they instead offer guidance through metaphors. Thus, we should not interpret Mary’s vision to mean that Dr. Jeff is drowning in some malarial Southeast Asian swamp; instead, we should understand that the true barrier to deeper intimacy in their relationship is the good doctor’s terrible incontinence.