I mean … not hilarious or anything, but … I actually laughed. Well, “laughed” is a strong word. Strictly speaking, I exhaled out my nose a little harder than usual. Still and all, I need help. I know it.

I didn’t cover Sunday’s Apartment 3-G, mostly because I don’t think it’s particularly cool when comics encourage kids to do drugs. But now that I’ve seen Monday’s strip, I have to say that it’s one of the more egregious instances of content recycling in recent memory: 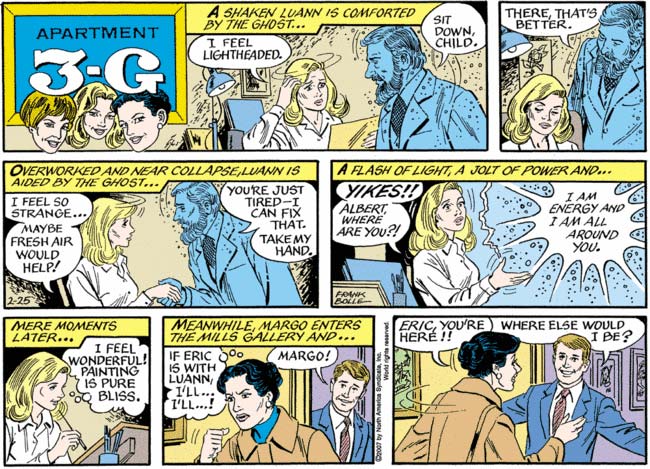 I know that the soap opera strips have to spend Monday recapping Sunday because not everyone gets to see the Sunday strip, but this week Apartment 3-G seems to have mainly tweaked the dialogue and taken out the Margo panels. And is removing Margo from an installment of Apartment 3-G ever a good idea? No, no it is not. You could show three panels of Margo reading the newspaper and sneering at no one in particular and it would be more gripping than anything that ever happened to Tommie.

There are so many layers of insanity to this strip that I barely know how to approach it. Do the police ever ticket drivers for excessive musical volume? Does Dagwood labor under the assumption that the theme from Bondanza can never be played too loudly? Was he sitting at a stoplight, his subwoofers causing all the cars around him to vibrate, only instead of blaring Master P as God intended, he instead treated the world to that all-too-familiar “dun da duh dun da duh dun da duh dun da DAHH DAHHHH”? Still, what disturbs me the most is that somewhere out there in Blondie land, there’s a radio station dedicated to classic TV theme songs. I’ve been telling people for years that the 517 different channels available on satellite radio will eventually destroy all that’s decent about our society; maybe someone will finally listen to me now. 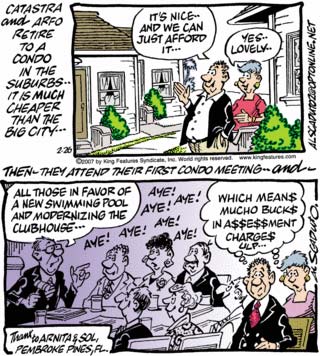 “How it is dept.: Libertariana and Rando are sick of their taxes being used to fund city schools and parks for poor people, so they move into a condo complex that keeps the proles out. But howzat? Homeowners Associations can also force you to pay for improvements for the common good? OH YEAH!!!” I’m surprised the acknowledgment line didn’t read “Anita and Sol, Unnamed Heavily Armed Encampment, Somewhere in Montana.”