B.C.’s love of the interrobang should come as no surprise to regular readers of the strip. But since it’s not a love shared by the population at large, it probably wouldn’t have hurt to actually, you know, show one (if your browser can display it, you should see one here: ‽). Since most readers probably never even heard of this useless punctuation mark even during its 1960s heyday, that first panel might as well have read “Who can tell me what a ‘shootupsuspect’ is?”

B.C.’s use of the accidental (or “accidental”) death of someone in police custody as joke fodder should also come as no surprise to regular readers of the strip.

Speaking of odd typography, what exactly is that symbol between the 2 and the 4 on the blackboard in the third panel? It looks like a backwards “R” — like the one used in the title of that Amerika miniseries in the 1980s, where the Soviets take over and then put all registered gun owners into concentration camps. Hmm, I’m seeing a pattern here.

You watch out, Angela! Cedric is going to point the hell out of at you! Look at that blast of energy — he points with the pointing power of a thousand temp butlers!

Lord only knows what sort of outfit Cedric favors when he’s not on duty, but panel two is proof that it’s physically impossible to look menacing and bad-ass when you’re wearing a bow tie.

Yeah, see, this is what I’m talking about: Margo, baby, Margo! Just as Lu Ann’s art studio adventure is a cautionary tale on the dangers of huffing paint, so Margo’s drama illustrates how cocaine use can ravage your relationship with others. In panel one, our girl Magee is a tightly coiled spring of rage, ready to punch the next person who crosses her — or even looks at her funny — right in the teeth. In panel two, she’s so happy to see Eric that she looks like she’s going to lunge at him and tear off his clothes, or possibly his face. I hope that the “someone special” that Eric wants her to meet is wearing a catcher’s mask, for his or her sake. 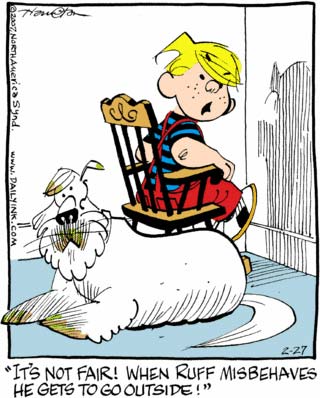 Ruff also doesn’t have to go to school, and gets to urinate outside and roll around in his own filth. On the other hand, there’s the whole castration angle to consider.

If you have to repeat the same phrase twice — once to mishear, once to clarify — in consecutive panels, then your miscommunication-themed joke has gone off the rails. On the other hand, I appreciate the mace-like object that Tina is holding in the final panel. Apparently she feels that Mother Hobbes deserves to be bludgeoned to death.