Your COTW momentarily, but first, a link from faithful reader knittaplease! Have you always dreamed of the day when Hubert Selbey’s Requiem for a Dream would be combined with the now retired syndicated comic strip Cathy? Your dreams have come true, my friend!

“That’s right, Mary. I always wanted chlamydia. And now … I’ve got it!” –btown

“Is Tommie Thompson so hard up for some lovin’ that she perpetually keeps her lips pursed in hopes she stumbles onto a kissing bandit or friendly golden retriever?” –Baka Gaijin

“My cooking and my advice are a great combination. Both are bland, hard to swallow, and eventually induce vomiting.” –Digger

“I like how bored Thor looks in the second panel. Longtime Spider-Man reader, I guess. ‘So this is where a bird shits on him or something and he passes out, right?'” –Roto13

“I love how Jeff the bank robber, after donning that coat, is a dead ringer for He-Man after he decided to restart his career and become a Don McLean-esque folk singer.” –Aelfric

On a character “overdosing on tattoos” in Gil Thorp: “If he is overdosing then you need to take a syringe full of adrenaline and jam it right into his hear. Now you have to do it hard enough because you will be going through his rib cage. Why are looking at me like that? It’s how they did it in Pulp Fiction. You haven’t seen it yet. It’s the most popular movie in theaters right now. This is the Nineties right? I can’t tell when we are anymore.” –Liam

“I like to think the arrow in Momma is there just to prove to the reader that there is a joke located in the strip.” –sporknpork

“Judging by the look of delight on Nola’s face, I’m wondering what the heck she could need advice about: ‘I can’t figure it out, Mary. When you hold a man in the palm of your hand, do you rub the ice cube above the scrotum or below. What do you do, Mary?'” –Bill Peschel

“Obviously, the ‘blue pill’ is an allusion to the Matrix. Pluggers, by definition, have chosen to take the blue pill to escape back into their dreary life of slavery, by choice, because the concept of the red pill and all it represents — free will, being happy, having a funny comic strip — is too horrible to contemplate. Now, honey, where’s my Metamucil? I want to have some me-time.” –Crankenstank

“I like to imagine that Nina has spent the entire duration of her visit with Margo dropping increasingly unsubtle hints about her pregnancy, only to have each one go over her head. ‘I HOPE I CAN FIND A GOOD PEDIATRICIAN’ ‘HEY MARGO, DO YOU THINK GRANT IS A NICE NAME FOR A BOY?’ ‘DO YOU WANT TO FEEL IT KICKING?’ None of these were working, so she went with the most obvious indicator of pregnancy there is, outside of ‘A SMALL HUMAN BEING HAS BEEN DEVELOPING INSIDE MY UTERUS FOR THE LAST FEW MONTHS.'” –Irrischano

I must thanks to all who put some cash into my tip jar! And we must give thanks to our advertisers:

OK, so here is my excuse as to why I was late with the first few days of this week’s comics, which is that I was in scenic Orlando, Florida. While in America’s #1 Central Florida tourist destination, I stopped by the Universal Islands of Adventure, and while maybe I was mostly interested in Harry-Potter-related activities, I was also keenly aware, thanks to a steady trickle of photos sent to me by faithful readers over the years, that there was a real live Mark Trail diorama to be found. And when I spotted it, it was all I had hoped and dreamed of … and more! 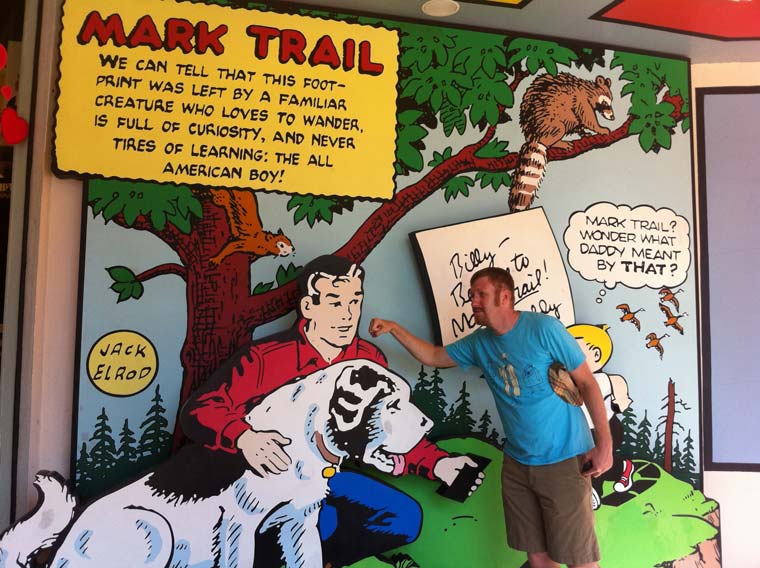 Yes, here we have Mark and Billy Keane interacting, for some reason! And what the pictures I had seen couldn’t convey was the fact that this display has an audio component as well! As I stood nearby and pretended to menace Mark with my feeble fist, his soothing voice was piped in from a speaker above his head, informing us that he works for Woods and Wildlife Magazine and loved nature. For reasons I cannot comprehend, Mark is the only character in the whole Toon Lagoon area who gets to speak! Do you think that any of that makes sense to anyone who visits the park, other than the soap opera strip obsessives who read this blog?

There were other characters on display there, and a weird grab-bag they were. They certainly weren’t the most popular characters, but they also weren’t from any one comics syndicate, which means we can rule out corporate synergy as a basis for the character choices. For instance, there’s this Shoe display! Kids love Shoe, right? 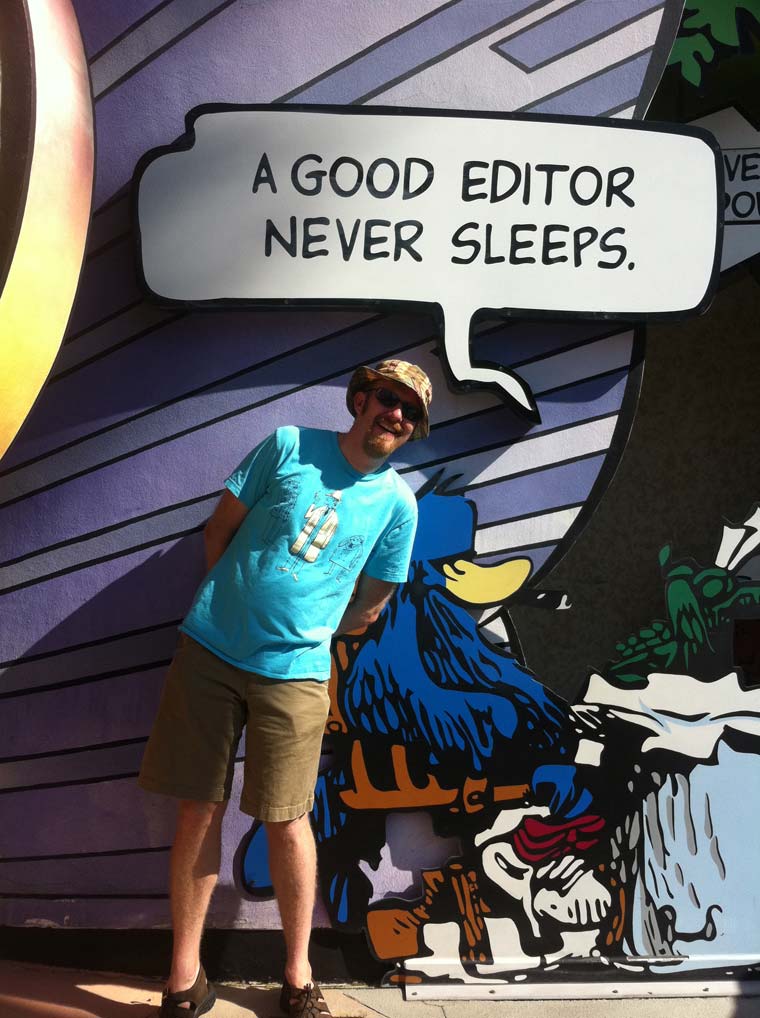 You also have the opportunity to stand directly under Marvin’s no-doubt poop-filled diaper: 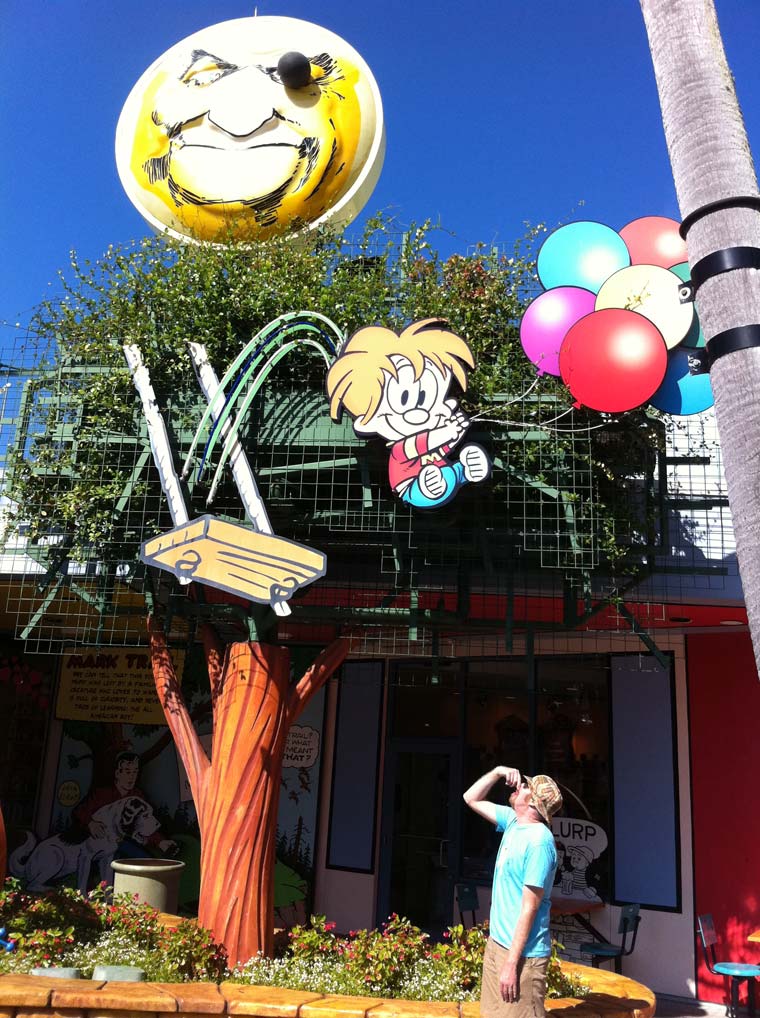 And you can get some ice cream, if you aren’t scared off by Cathy’s looming crotch. 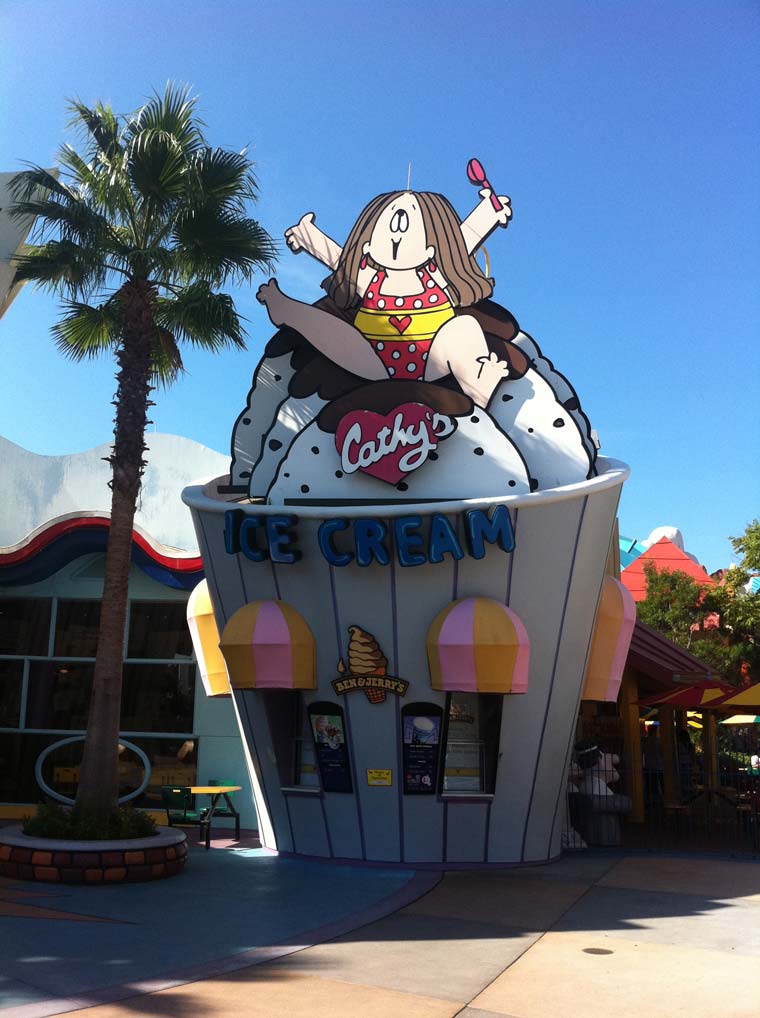 In summary, the Toon Lagoon section of the Islands of Adventure is a good place to spend a few minutes of ironic bafflement before moving on to actually fun parts of the park. (Although the Dudley Do-Right log flume ride is pretty great. I had forgot how completely pun-tastic that show was!) 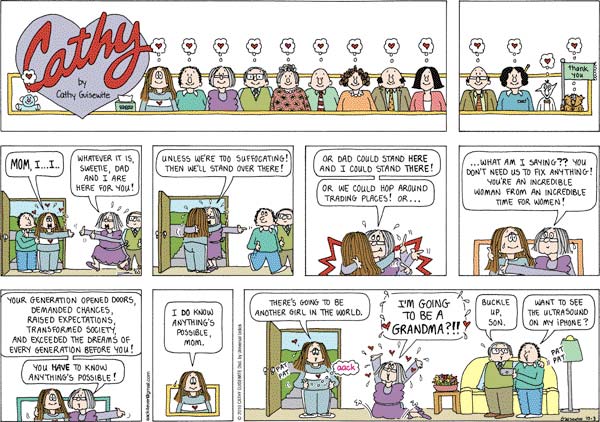 Being America’s #1 Newspaper Comics Blogger is in fact a pretty sweet gig, but sometimes there are heavy responsibilities that go along with it. For instance, you are expected to have opinions about things that you don’t really want to have opinions about, like the end of Cathy! Readers of this blog know that my feelings about the strip range, depending on the day and the punchline, from disinterest to irritation to occasional mild but shameful amusement. In Cathy’s very first mention on this blog, I openly rooted for the Cathy-Irving marriage to herald the demise of the strip; probably if it had wrapped up back then, in the summer of 2004, I wouldn’t have felt a need to weigh in.

It is important to remember that when Cathy launched in 1976, it was actively new and exciting and, in the grand scheme of things, good for a newspaper comic to focus on a lady who was unmarried and had a job. Sally Forth mined some of the same novelty (minus the unmarried part) when it launched a few years later; but Sally was always a more or less fully functional human being, whereas Cathy is a nightmare bundle of neuroses. The fact that the character always seemed to take every negative stereotype about women and extend them to cringe-inducing extremes made it hard to celebrate it as a feminist achievement.

But still, there is one thing we can really thank the strip for, and that is only revealing Cathy’s successful insemination in the final strip, rather than subjecting us to God knows how many months of strips about morning sickness. And maternity clothes! Good lord, can you imagine all the strips with Cathy trying on maternity clothes? Sparing all of us this was a true act of mercy. 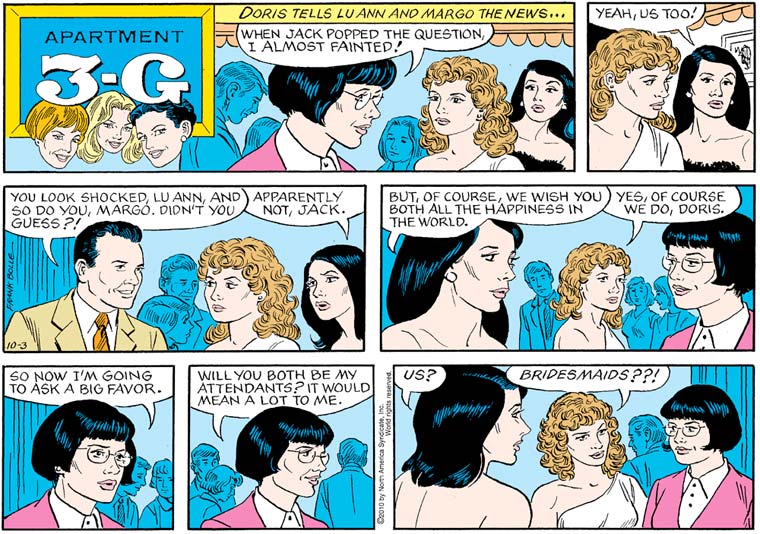 Meanwhile, in happier news, the predicted Tommie-ignoring is proceeding apace! “I had always dreamed of having a huge wedding party, but really, other than the two of you, who else is there?”