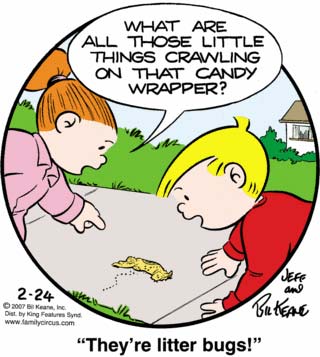 Siddhartha Gautama was born a prince, and his parents vowed that he would never experience any suffering. When, as a young man, he slipped out of the palace and saw an old man, a sick man, and a corpse, the shock set him on a spiritual journey, at the end of which he became known as the Buddha, or “the Awakened One.”

Since Dolly has apparently been kept in some kind of hermetically-sealed plastic bubble, protected even from insects, for her entire life, I’m curious as to what sort of religion she’s going to found as a result of her stunning first encounter with these tiny filth-eating creatures. I’m guessing it will really, really like ants, or really, really hate them.

Who knew that Dan would make this the sexiest Mark Trail storyline ever, what with his strolling around naked day after day? Admittedly, random objects intervene so we can’t see his perky man-nips, but this is Mark Trail, where a lady’s sexiest outfit is a pink polo shirt, so you have to take sexiness where you can find it. The first panel in particular, taken in isolation, would work if Dan were about to go on stage one more time tonight as part of some tawdry Chippendale-style revue; even though he’ll be subject to the drunken stares and hooting of dozens of women, he assures his lady love that hers is the only gaze he really cares about.

I’m assuming Dan’s “thing” is actually some kind of ill-conceived insurance scam involving faking his own death. The plan will fail because it relies on Sally’s anguished reaction in the wake of Dan’s feigned demise; since she never seems to have any dialogue, I’m guessing that her inability to speak will derail the scheme.

So, yeah, this happened. Do you think maybe all the other FW suffering is in video game form too? Harry Dingle could get his hearing back if he just got more power-ups? Cancer Girl is really playing Halo’s “Remission” mod? 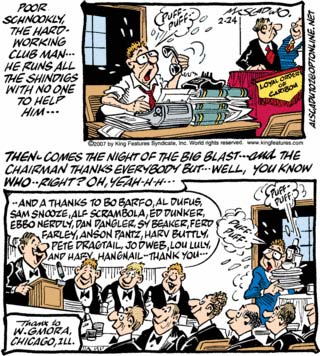 I’ve mostly posted this so that you could unironically enjoy the Loyal Order of Caribou roll call (including “Anson Pantz” and “Harv Buttly”). But I do wonder whether Schnookly is less a “member” of the club and more its “hired servant.” It would explain a lot.