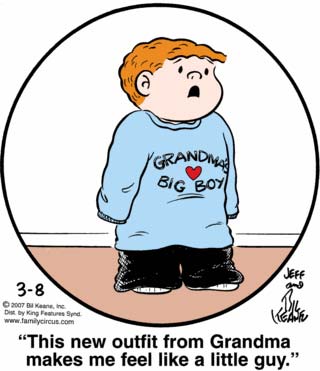 Man, does the total and constant humiliation of Jeffy ever get old? I’m going to go ahead and say “no.” In a normal human family, Grandma would have probably sent clothes a few sizes too big in the expectation that her grandson would soon grow into them; however, since Jeffy’s been the same height for decades and shows no sign of getting any taller, we have to assume that her aim was to drive him ever deeper into self-loathing.

So the Phantom is in the midst of an incredibly dull storyline involving the kidnapping of Old Man Mozz and some bank robbers who want the seer to [Note: Rest of recap cut because of extreme dullness. –Eds.] Anyway, I’d just like to point out that Kono slipping and falling on the steps of the bank he’s attempting to rob, followed by him cracking his dreadlocked skull open as his eyes roll back in his head, is a pretty gruesome image for the funny pages.

And where is our purple-clad, stripy-butt hero in all of this? Last we saw him, he was lounging in a jungle clearing while his cone-headed midget sidekick was napping on top of an elephant. No, really.

You heard it here first, people: The only choice available for the radio-listening plugger is “AM” or “FM.” What, you also want to be able to change channels within each band? What are you, some kind of chardonnay-swilling East Coast liberal elitist? In this sense, plugger radios are like the one available in Nazi Germany, which were also pre-set to a single station. Although my guess is that pluggers listen to a lot fewer hateful rants about how the Jews are undermining the purity of the master race and a lot more hateful rants about how the Cowboys really need to get more free agent help for their offensive line.

I also note that today’s featured plugger has been banished out of the house entirely, presumably so that his radio listening doesn’t distract his she-plugger mate from her “stories.” Either that, or all his furniture has been repossessed and a tree stump is a “plugger easy chair.” 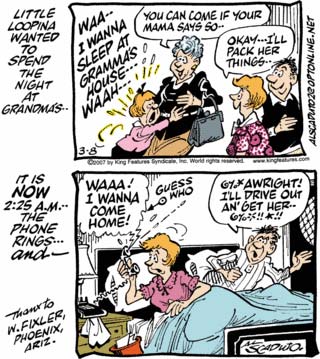 The looks of pure joy on the faces of Loopina’s parents in the first panel at the prospect of a Loopina-free evening are only matched by the wave of obscenity-tinged bile we get in the second. It seems that her parents don’t really like her very much, though that should have been obvious from the mere fact that they named her “Loopina.”