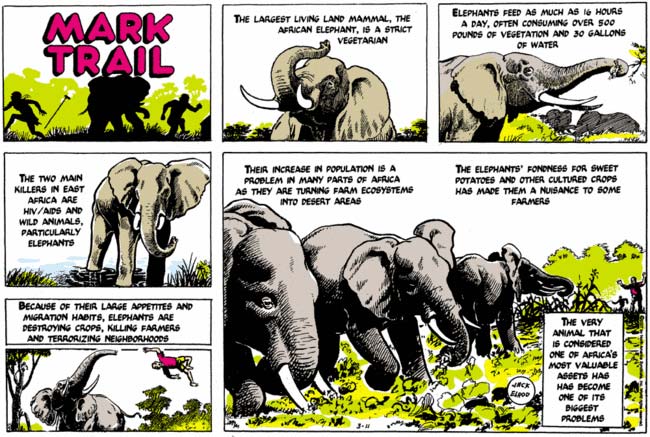 Holy smokes, this is one of the bestest “Mark Trail Teaches You About Nature And Crap” Sunday Mark Trails ever! None of the usual “Aren’t animals interesting/endangered/cute” nonsense today; instead, we get a crazed gang of killer elephants, harassing a pair of fleeing stereotypically garbed natives, flinging some red-shirted white dude across the savannah, and molesting a field of innocent sweet potatoes like so many 15,000-pound gophers. Mark himself, who usually strolls fearlessly into the frame to narrate as his chosen beast of the week menaces the nameless extras who are clearly desperate to break into the comics, has wisely chosen to stay safely off-camera when it comes to the tusked menace that is the elephant.

I’m guessing that the strong elephantaphobic slant of today’s strip was made possible from a large check from the International Federation of Ivory Harvesting Professionals. 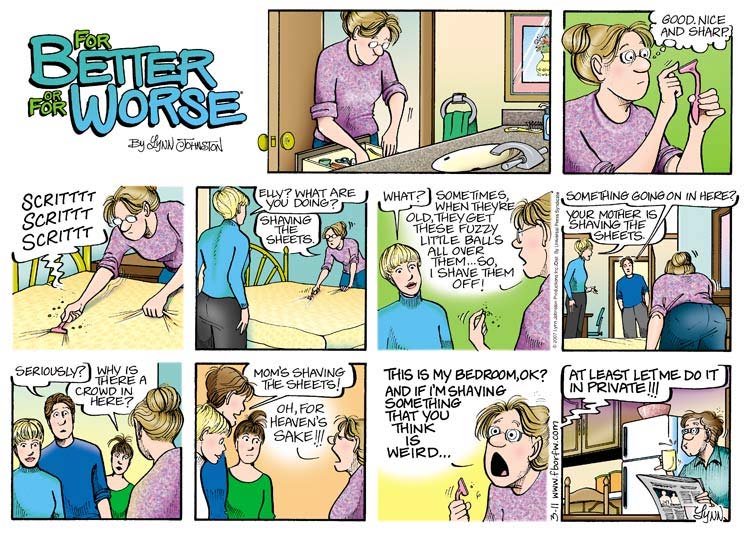 Yes, the whole point of this overcontrived family drama was to make John think that his wife was shaving her nether parts in front of several of her children; and yes, it’s both horrifying and kind of shamefully funny. I mostly want to point the second panel, which would make an excellent LiveJournal icon to sit atop the phrase “Mood: Suicidal”. 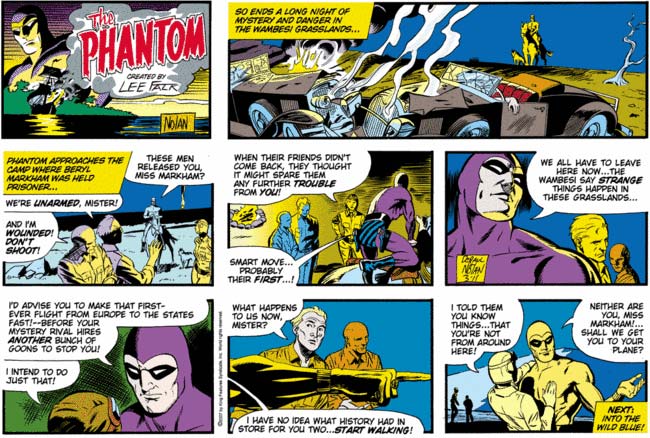 I haven’t been covering the current Sunday Phantom storyline at all, because it’s pretty dull; it has centered some kind of weird temporal anomaly that has allowed the Ghost-Who-Violates-The-Laws-Of-Physics to interact with a group of gangsters from the ’30s who have been trying to stop a thinly veiled Amelia Earhart stand-in from making an historic flight of some sort. I’m kind of intrigued by the last panel, in which the very married Big Purple Guy allows the comely aviatrix to rest a hand on his enormous left pectoral muscle; I guess his logic is, “Hey, it’s 1937, I’m not going to be married for about 50 years, so anything goes!”

(UPDATE: Thanks to several commentors who pointed out to me that “Beryl Markham” is not actually some made-up character meant to avoid a lawsuit from Amelia Earhart’s estate, but a real person who actually lived in East Africa. I never should have doubted this, as the Phantom’s devotion to authenticity is notorious. Also, time travel is real.) 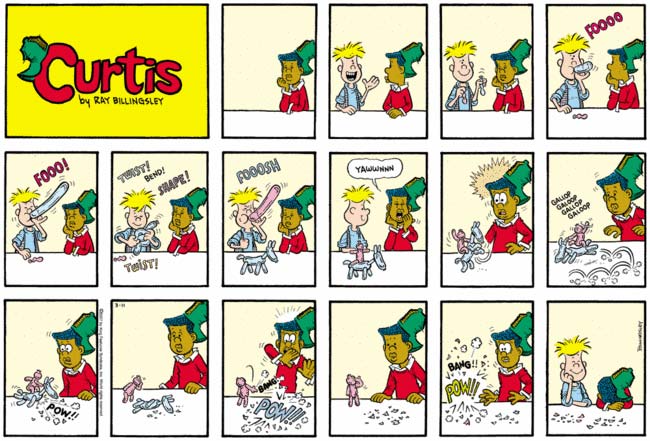 I could point out that Gunk’s “balloons” look remarkably like condoms, or that while “FOOO!” is a legitimate onomatopoeia, “TWIST!”, “BEND!”, and “SHAPE!” are not. My main concern, however, is that Gunk has used his devilish Flyspeck Island powers to create living beings out of inanimate matter, only to force them to end their short lives in a mercy killing and suicide. The face-flop is a usual exaggerated Curtis response to a joke, but here I hope that our protagonist is weeping openly at the sadistic little performance he was just forced to watch.