A thing that I know I shouldn’t get worked up about and yet do is the presence of animals in comic strips where everyone is an anthropomorphized animal. I mean, Roz’s dog is on four legs and doesn’t have humanoid hands, so I guess he’s supposed to be a non-sentient being, and I suppose its species-ist of me to just lump animals all together in one class, but it creeps me out to see a bird who owns a dog. In a world where everybody’s an animal, a hotel with a “no pets” policy is kind of like a hotel with a “no slaves” policy.

Um, not that I’d be really all in favor of a hotel with a “Yes, we love slavery!” policy or anything.

I’m curious about why exactly Roz is checking into this hotel in the first place, since I don’t think I’ve ever seen her not behind the counter of her greasy-spoon treetop diner. Perhaps she’s gotten tired of shoveling food at ingrates and has burned it down for the insurance money.

There’s a lot of weird crap in Mark Trail that I accept without too much mental discomfort — Mark’s unsettling lack of affect, his repeated acts of vigilante justice that go unpunished, the giant animals with word balloons coming out of inappropriate places — but I have a really hard time accepting that Mark suddenly deduced Diver Dan’s entire nefarious scheme from a single tiny screw hook, mostly because Mark has shown repeatedly that he doesn’t have the brainpower that God gave a bowling ball. Cherry, meanwhile, seems kind of horrified by the very thought that Dan might still be alive. “HE’S DEAD, YOU HEAR ME? DEAD! I WANT HIM TO STAY DEAD! IF I SEE HIM ALIVE, I WILL DROWN HIM AGAIN!” 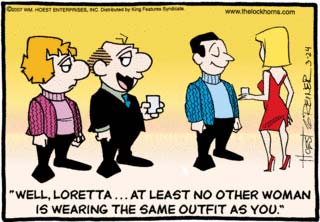 I know the central schtick of the Lockhorns is that the title characters are intolerably cruel to one another by turns, but for some reason Leroy’s smugness and Loretta’s downcast expression are especially poignant to me today. Loretta’s unisex getup may not be as sexy as what the lady in the red dress has on, but at least she’s not wearing those crippling shoes. Mr. Cardigan-Turtleneck Combo is about to find that the gal he’s been chatting up is going to fall into his lap, literally.