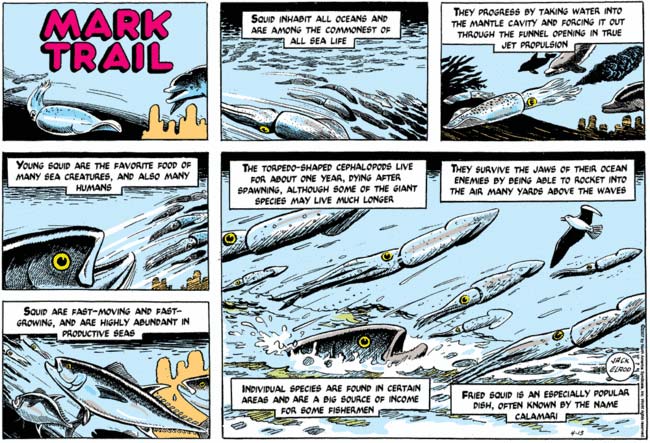 Let it never be said that the Sunday Mark Trail strips aren’t educational and informative. Without them, I’d probably still view elephants as gentle, endangered herbivores rather than the murderous, yam-poaching menaces that they are. Today, I learned that, despite all my assumptions and common sense, great herds of squid can and occasionally do leap out of the water in precise, Olympic-synchronized-swimming-quality formation. It’s a good thing I learned this in the safe confines of the comics, because I think that if I had encountered a flying flock of squid in real life I would have been reduced to a quivering, urine-soaked lump of fear.

The goofy, absurd punchline to this strip hearkens back to the days before Funky Winkerbean took The Turn To Grim, but with the shadows everywhere, the glum faces, and the general pall hanging like a black cloud over everything, there’s no mistaking it for anything but a product of this feature’s late ’00s bleakness. I particularly like Black Teacher Dude Whose Name I’m Pretty Sure I Never Knew’s attitude of slouched resignation in the second panel. He seems reasonably sure that this newfangled copier will somehow make his job obsolete and put him in a homeless shelter within the month. He’s right, of course, but what he doesn’t realize is that he’s standing too close to its radioactive core and he’ll leave his job with a nasty case of stomach cancer to boot. 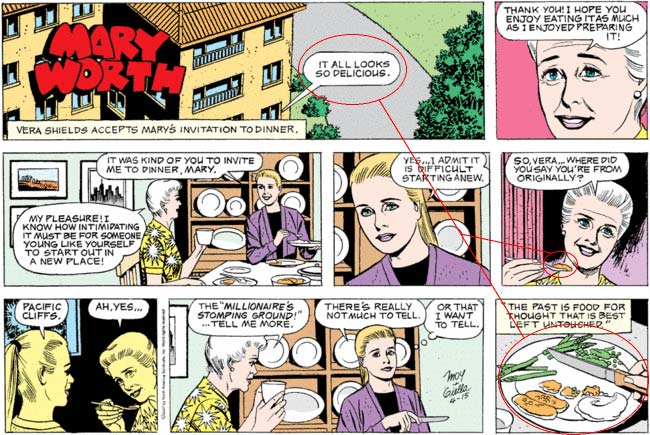 As I think my visual annotations above prove pretty well, Vera Shields is either completely insane or very, very sarcastic. (For more visual evidence of Mary’s horrible cooking, check out this post on Subdivided We Stand, faithful reader Smitty Smedlap’s blog.)

No snark on this one from me, just thought you’d all enjoy it. I particularly like the way Leroy Hateachothers keeps his cool and makes a wisecrack while everyone else panics.