We all know that Slylock and Max use their status in the community as well-known vigilantes to spy on consensual B&D play. I suspect that this little puzzle has been staged to further their sex lives as well. It’s the reason why the stubbly dog/bear/whatever thing looks so mad despite the fact that it’s the toad that’s ostensibly guilty. Clearly our dynamic duo of ratiocination have slipped this pair of lowlifes a tenner to act the part of the villains in this little sham mystery; the dog/bear thing is realizing that while his share of the payoff won’t last more than the five minutes it takes him to polish off two shots of whisky, the mouse and the fox just earned themselves several nights of sweet mystery-solving lovin’. The toad, being an amphibian, doesn’t understand the mating habits of mammals, and just stares on dumbly.

OH SNAP MARGO YOU JUST GOT CALLED A BUN-HEADED HO!

Since Katy’s mom is “Ms. Mills,” she’s clearly Eric’s sister-in-law rather than his actual sister, and so therefore fair game for bitter hatred from our gal Magee. In the real world, of course, it would be possible that she had just kept her maiden name, but in the comics pages nobody does that for fear of unleashing thousands of angry letters from people ranting about “feminazis.” They’re going to get a few of those anyway just for using the dreaded “Ms.”

“Lock your eyes on one hole, get set, and swing. And keep doing it” is of course an unspeakably filthy phrase, but in a strip that frequently features dialogue like “Liz Ritter all but forces Stormy Hicks to go to The Bucket,” it’s not really all that remarkable. What’s more disturbing to me is the fact that that the appointment of Lisa Wyche’s wannabe jock mom as assistant girls hoops coach is not an isolated incident: Apparently Milford High is going to make a habit of allowing bored, isolated community members to give rambling instructions on athletic techniques to the school’s students. This could cause trouble. I’m sure in the movies we’d all enjoy the kindly old man who offers his years of experience to coach the team of misfits to a championship season, but in this age of insane paranoia, once the PTA gets wind that some bald dude is urging the town’s youth to “lock your eyes on one hole” and “keep doing it,” they’d ride him out of town on a rail. 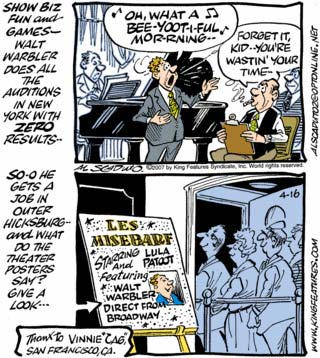 Never mind Walt Warbler’s blatant resume-padding; isn’t it kind of odd that Lula Patoot is doing touring-company theater in the sticks just days after she inked that $15 million move deal?

What I’m most intrigued by here, of course, is the play that Lula and Walt will be singing in, Les Misebarf. I’m assuming that, following in the wake of Urinetown’s success, it’s a re-imagining of Victor Hugo’s classic novel of political upheaval in France with the characters expressing their deep-felt emotions by vomiting on one another. Patrons with seats in the first few rows are warned that they will get wet. What I want to know: is it pronounced “Miz-barf,” “Miz-ay-barf,” or “Mies-barf”?