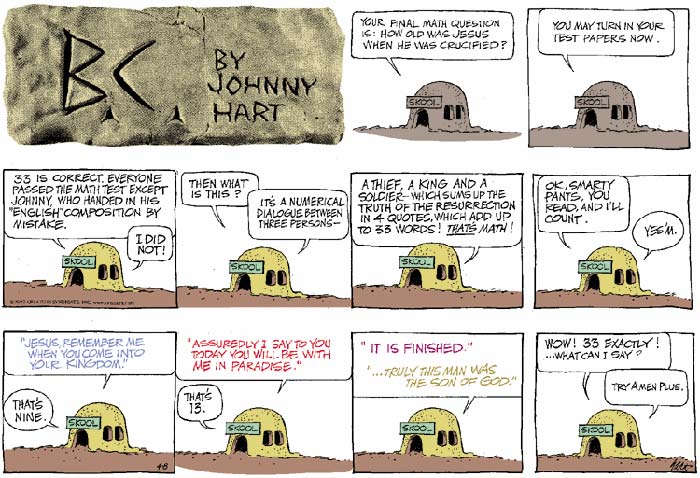 Johnny Hart, creator of B.C. and writer (or co-writer? I’ve never been able to nail this down exactly) of Wizard of Id died Saturday. Today’s Easter strip is perhaps appropriately typical of his later work: infused with his religious beliefs, and largely idiosyncratic and inscrutable (numerology?). He liked to take potshots at atheists, Darwinists, and Jews, and as an interested party I have a hard time not taking those personally, but I’m not going to write anything mean about him today. Instead, I’ll just note that the dude died at his drawing board. That’s hardcore.

Here’s the obit from the AP via CNN. One of the things that struck me was this bit:

Richard Newcombe, founder and president of Creators Syndicate in Los Angeles … said Hart was the first cartoonist to sign on when the syndicate was created 20 years ago. “Traditionally, comic strips were owned by syndicates,” Newcombe said. “We were different because we allowed cartoonists to own their own work. It was … Johnny’s commitment to this idea that made us a success.”

Newcombe said B.C. and Wizard of Id would continue. Family members have been helping produce the strips for years, and they have an extensive computer archive of Hart’s drawings to work with, he said.

If I have any pull at all in the comics industry, I have to beg and plead for this not to happen. Say what you will for good or for ill about Hart’s work, but it has always struck me (despite that note about help from family members) as being indisputably his work. The best way to honor that would be for it to stand on its own, not to be continued by assistants cutting and pasting new dialogue into scans of old strips. Because of the way that comics publishing works, there will be a few weeks worth of Hart-authored strips still to run, but after that it should bow gracefully out. It may be hard to believe for younger folks, but Hart was one of a generation of young turks who shook up the comics page in the 1970s, and letting his strip continue in other hands denies that chance to others and diminishes what went before.

Some folks have already used other comment threads to argue vociferously about the best way to honor (or not) his memory. Feel free to work out your aggressions here; doing so elsewhere will get you sent to The Cockpit.