A while back, I suggested that the name of this strip be changed from Crankshaft to the somewhat wordier but more accurate Jesus Christ, Ed Crankshaft Is Such An Asshole. I now think it should be stretched out to Jesus Christ, Ed Crankshaft And All The Other People In This Strip, Who Are Associated With Him In Some Way That I’m Not Clear On Despite The Fact That I’ve Read It Daily For Years, Are All A Bunch Of Assholes. I know your mom is a difficult and crotchety old lady, but dude. I hope you didn’t tell this heartwarming little anecdote to her aide right in front of her. 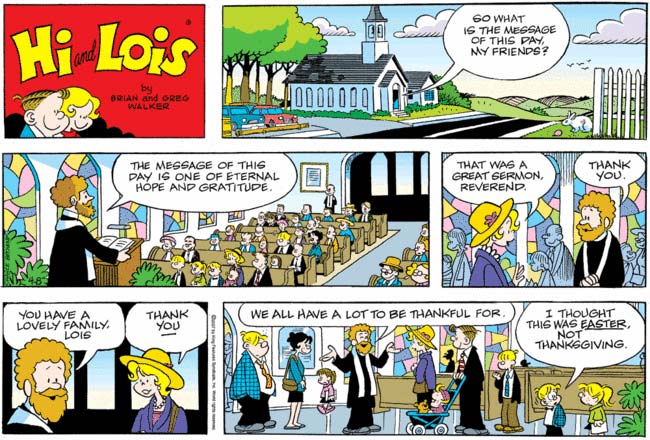 Meanwhile, it appears that Hi and Lois’ pastor is a dirty rotten filthy hippie. Liberals! 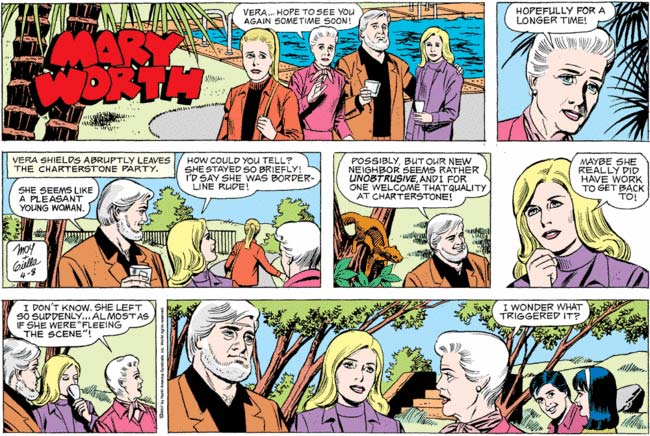 I keep hoping — and keep being dissapointed, but hope does spring eternal — that each new character that comes into this strip will finally be the one that allows the Charterstone Mafia to see themselves and evil, petty, self-absorbed individuals that they are. Sadly, we all know that Vera will submit to the will of Mary and allow herself to be meddled into self-actualization by Mary and her minions, but I’d like to believe that the sneering young man in the final panel is meant to represent us, the readers. “Wait … you don’t know? Just look at the three of you lined up there. Why wouldn’t she run?”

And a couple of one-off panels:

Most of this week’s Sunday Phantom just treaded water after last week’s, with this well-dressed trio being hassled by the Presidential Security Dragoons, but it was all worth it to see this awesome final panel, in which one of those ubiquitous executive rolling suitcase turns out to be filled with SCARY BONES AND STUFF. One might wonder how exactly this made it through the x-ray machines that are compulsory at airports everywhere now (yes, even in Africa), though if the NEXT box is any indication, perhaps they just laughed it off by telling airport security, “Oh, it’s okay — I’m in the death trade.”

Dot-ack? Dot-ack? All right, I admit it: this is a Cathy in-joke, and I found it funny. I would be willing to petition ICANN to create a .ack top-level Internet domain, which would be dedicated to Cathy-related content.