Sure, Gabriella is a cringe-inducing stereotype who babbles in a parody of Spanish that’s worse even than the Judge Parker punks’ French. She also nurtured the black, black soul of Margo in her womb for nine months. But if she manages to rescue Lu Ann where all others have failed, she’ll officially become one of the most together and interesting people in this strip, rivaling the “I’m a docent!” guy and leagues ahead of Tommie. She’s doing it with style and panache, too, saying a little prayer and then letting Satan himself know that she is on the side of good and that his infernal “locks” cannot keep her from her holy mission. 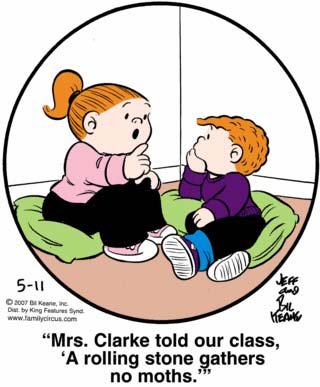 For reasons I can’t explain, I am totally charmed by the fact that Jeffy and Dolly have thrown some pillows on the floor to relax on for their little chat, and that Jeffy is resting his chin in his hand while he contemplates the insane nonsense that his sister is spouting. If they were older, I’d say they were high (“Hey, is that old saying, like, ‘moth’ or, like, ‘moss’? And, like, what does it mean?”), but as it is they’re clearly just morons on pillows.

So, for those of you not following the details: the B.C.s written before Johnny Hart’s death ended around the end of April, and for the next eight weeks or so we’ll be getting the Hart family’s favorite classic strips before we start in with the “new” strips assembled from old drawings and new jokes. The repeat strips have as near as I can tell all been from the last ten to fifteen years, which is kind of odd for a strip that had decades of storied history and a kind of terrible last ten to fifteen years.

Anyway, today’s repeat struck me as really familiar, which is an experience I have a lot, since I read newspaper comics obsessively and have a disturbingly good recall for them. If you squint at the copyright notice beneath the first panel, you’ll see that the date on this is 1996, but my memory of it was a lot fresher, so I went hunting through my archives and found this, from three months ago:

Yeah. Um. The weird part is that it’s clearly not the same strip — the art is different and the wording of the punchline has been tweaked a bit. I do need to say that if you have to write a joke every day for years and years, you could actually plagiarize from yourself and not realize it — after all, if you thought it was funny once, you might think so again a few years later. Going through my archives, I’ve found that I’ve made the same joke, nearly word-for-word, in more than one post. Still and all, you’d think someone else would have noticed that and chosen not to run this rerun strip just now.

Now, let’s cast aside our petty differences over Asian stereotypes and dumb names and unrealistic corporate governance procedure. I think we can all agree that panel three is the most awe-inspiringly beautiful depiction of a combover ever set to paper by an artist. Mary Worth team: you’ve been resting on your laurels long enough. The next time Wilbur needs a close-up, you’ve got to raise the bar. 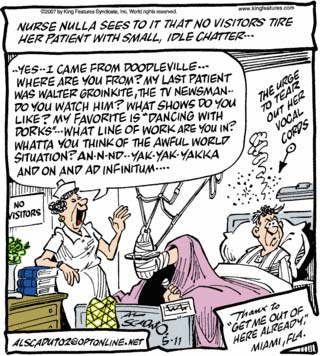 There’s much to love about today’s TDIET, including, but not limited to, “Doodleville,” “Dancing With Dorks,” “the urge to tear out her vocal cords,” Nurse Nulla using a conveniently placed stack of books as a leaning post, and “Nurse Nulla.” But I’d really like to direct your attention to the “thanx to” box. It’s as if someone held captive by substandard medical care sent a desperate message out to the only person who he knew could help: Al Scaduto.