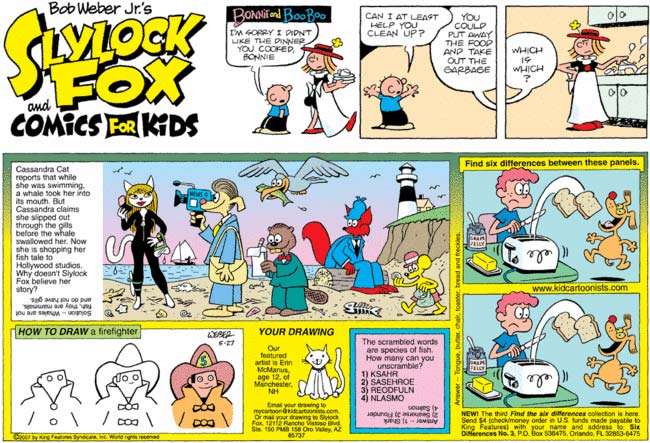 Ah, that sexy Cassandra Cat! With her skin-tight wetsuit and her … pale … pasty fur … totally different from the tawny coloring established in her previous appearances … like a three-day-old corpse … seriously, what the hell happened to her? Is this what a cat looks like after it’s spent some time in the water? It’s creeping me out.

Speaking of things that creep me out, the first iteration of the firefighter in the “how to draw” section at the lower left is missing not only his nose and mouth, but also most of his brainpan. It makes it very difficult to look at the completed drawing without imagining that big hat resting on the flat surface of his impossibly truncated head.

Back to Cassie’s grift: I do appreciate that various genres of news media are here to cover this sexy, sexy story: the big-haired dog from the local TV news, the eager beaver writing up the story for the newspaper’s morning edition, and the pelican, who’ll deliver the tale to an eager audience via half-eaten fish. 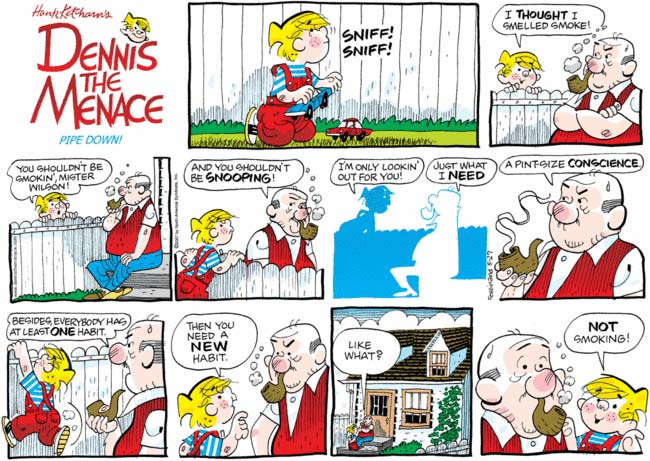 Good lord, just when I think Dennis can’t get any less menacing, he swings into action with his actively anti-menacing “stop smoking!” message. I suppose it’s possible that our young menace is being transformed into such a goody-goody that he becomes a menace through his cloying, annoying crusading, a symbol of the intrusive nanny state, though that doesn’t really match up with his traditional oeuvre of more straightforward menacing, like property destruction and nap disruption. It’s also possible that he wants to keep Mr. Wilson alive as long as possible so as to harass him further. “I’m not going to let the sweet embrace of cancer take you away from my persecution, old man!”

I’ve said it before, but there are few visual conventions in this strip that I find more unsettling than the “single bead of sweat coming down Mr. Wilson’s forehead,” a good example of which can be found in the rightmost panel of the second row. Really, the only thing it says to me is “WARNING! KILLING SPREE IMMINENT!” 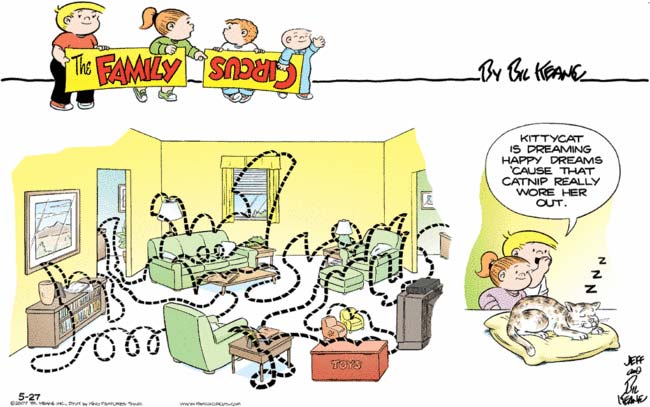 The Family Circus, on the other hand, does have a whiff of menace today. If this strip has an underlying message other than “drugs are awesome,” I’d love to hear it.