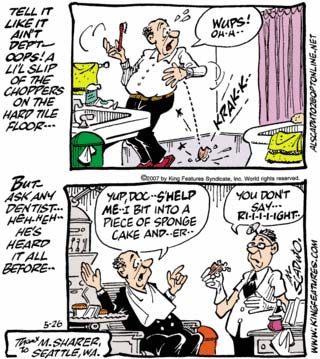 For many, TDIET is a glimpse into a kinder, gentler past, when doctors and nurses wore bright white starched uniforms and little kids of both genders wore plaid vests and inevitably responded to obscenity with a hearty “Oh, what you sa-a-a-a-i-d.” But today’s installment for me offers a look into the future — specifically, my future wearing dentures. Who knew that this seemingly innocuous prosthetic device came with its own elaborate code of shame? Who knew that breaking your dentures while eating is somehow socially acceptable to explain to a licensed dental professional, but that breaking your dentures while brushing them is not? I think I’ll redouble my flossing efforts so as to avoid ever having to navigate this complex sea of lies.

Yes, isn’t it odd that people are willing to idly pass the time discussing potentially untrue things written in a modern publication, but aren’t willing to wholeheartedly base their moral code and belief system about how the universe works on the exact wording of a series of books written between three thousand and seventeen hundred years ago and painstakingly copied by hand by semiliterates over and over again in the intervening centuries? I sure see exactly how this might confuse you.

On another note, I dare you to brightly say the following to one of your friends: “Wow, check out the latest on the hotel socialite! The stuff they say about her really makes you think, doesn’t it?” I’m pretty sure you’ll soon find yourself in an interrogation room at CIA headquarters, since obviously the only person who would construct such a sentence would be a sinister robot scouting out our planet and reporting back to an alien invasion fleet.

Wow, I was really torn between saying “Pluggers are almost unfathomably lazy” and “Pluggers really don’t understand how this stuff works,” but then I realized that I didn’t have to choose! That made me feel better.

“That’s right, I have it on good authority that he’s being scouted by the Baltimore Elite Giants and the Pittsburgh Keystones! Believe me, Mike’s got what it takes to have a real future in the Negro leagues.”