From today’s comments, I’m glad to see that the bulk of you share my horror at the Archie-Joke-Generating-Laugh-Unit 3000’s attempt to understand the human soul. The AJGLU 3000, having been programmed with the main motivations for everyone in Riverdale, apparently believes that it would be amusing to see these three running eternally after their hearts’ desires (Jughead: a White Castle slider; Reggie: a dollar sign written on a piece of paper; Archie: Betty’s severed head), never getting closer, their numb faces reflecting their dawning awareness of the Sisyphean nature of their task.

One sometimes wonders to what degree human beings intervene in the AJGLU 3000’s workflow. On the one hand, Coach No-Name, despite his boasts about the track team’s prowess, has a thousand-mile stare in panel two; clearly he knows just what an awful thing he’s done to his innocent charges, and expects retribution, either from a merciful God or in a lawsuit for emotional distress. That moment of self-awareness could never have come from a computer. On the other hand, if people edited this strip, you think they’d have noticed that all three runners have had their left arms hacked off, or that Archie is about to stomp on a puppy.

Hey, does that middle panel of inscrutably drawn young women staring silently confuse you and creep you out as much as it does me? You’re actually supposed to be seeing things through Branden’s eyes as her attempt to rally her teammates into a world of harmony and goodness flops terribly. You’ll note that the two girls the back of whose heads you can see in panel one are facing forward in panel two — Paris, who God only knows why I remember her name, and stripy-tank-top-girl, who I think might be the nosey newspaper reporter maybe? And then there are some blondes. Anyway, even to get this far into understanding what’s going on, you have to have read this damn thing every day and take a minute or two to connect the dots, which means that only I and twelve other people in America have done so. The artists would be better off making all of their panels look like panel two: wordless collections of random people staring at you with dead eyes.

Speaking of dead eyes, Coach Mrs. Coach Thorp is horning into Funky Winkerbean territory, waiting to hear back on the results of some chronic and inspiring illness that she’s been so busy dealing with that she can’t beat some sense into her feuding softball team. Evidentially she doesn’t want to hear what the doctor has to say, as she’s put the earpiece of her phone outside her hair and halfway back her skull.

I don’t want to say that Luann’s plots should feature explicit, hardcore, toon-on-toon sex, but … wait, do I want to say that? No, no, I don’t. But I do want them to stop acting like the characters are screwing or fooling around or kissing or having meaningful non-platonic relationships when they so clearly are not. If you had seen this strip out of context, you’d assume that Tiffany had come down to the fire station and hurled herself at Brad, and that they had gotten it on in the back of the ambulance, or at least made out for a while. Instead, what actually happened is that she ran her fingers up his tie and made several double entendres. The end. And now, Luann is going to freak. Because she’s in the Taliban or something and Tiffany has polluted her brother with her harlot fingers. It makes no God damned sense at all.

Also, Brad made some reference to previously having a girlfriend, by which he could only be referring to his totally pretend not-relationship with Toni Daytona. Which means that Brad has no idea what a “girlfriend” actually is, which I do find kind of plausible, now that I think about it.

On a different subject, many of you cruelly mocked recent maybe-widow and smooth corporate operator Heather Avery for having a pig nose in today’s Rex Morgan, M.D. But faithful reader bobbaloo (aka bob byrd) took a more charitable view: he thinks her nose just became detached from its moorings and accidentally flipped upside-down. Behold his correction! (The original is on the right.) 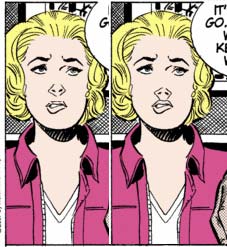