When I was a little kid, one of my favorite comic series was Richie Rich. I loved how ridiculously and cartoonishly wealthy he was; there was one particularly memorable sequence in which Richie and his family wandered through a wing of their freakishly huge mansion that they had forgotten existed, and found among other things a bathtub full of jewels. Archie’s Lodge family’s plutocratic status never quite reaches that level of caricature, but sometimes it comes close. The enormous gap in wealth between Veronica’s family and everybody else in Riverdale does lead one to wonder about the community’s economic structure: perhaps it’s all a company town owned by Mr. Lodge. The absence of a community of fellow-billionaires at least explains why Veronica goes to Riverdale High with the plebes: there aren’t enough rich kids to sustain an elite private school, and education at home with a governess has sadly fallen out of style.

At any rate, you’d think that the Lodges could at least afford a secluded private beach that wasn’t within binocular-viewing distance of the grubby seashore where the masses hang out. From the looks of it, they can’t be more than a hundred yards or so from the public beach; maybe there’s just a velvet rope separating the two or something. The weird target thing in the background might explain the proximity, though: perhaps the Lodges like to pick off plebian beach-goers with a high-powered rifle for sport. Since Riverdale law enforcement consists entirely of Lodge hired goons, they can hunt this cunning human prey with impunity.

The little girl at bottom right, who is at most knee high and yet appears to be about eight, is freaking me out. MAKE HER STOP STARING AT ME!

The immature among you will no doubt latch onto the phrase “I pumped you full” and have your jollies at the thought of ol’ Clambake sodomizing the student-athletes of Milford. Maybe you’ll even use it in your own classless double-entendres (“Yeah, I’d like to pump her full of misplaced confidence, if you know what I mean!”). For my money, though, the funniest thing in this strip is the narration box in panel three. If I had my druthers, every single Gil Thorp strip would include a panel that contained the phrase “Also down on himself: [Insert name of indistinguishable Milford resident here].” Soon the strip will be so consumed with self-loathing that it’ll make Funky Winkerbean seem like an Ecstacy-fuelled rave. 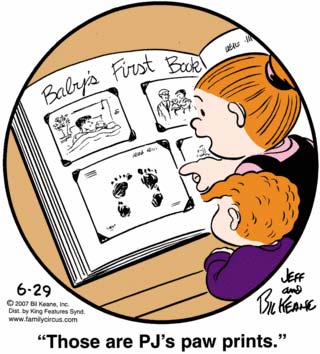 Since PJ is the fourth child, if we were being realistic his baby book would actually contain his crumpled-up birth certificate stuck between two random pages and nothing else. The kids seem to have the right idea, as they clearly think of him as one of the pets.