In today’s Archie, the Archie Joke-Generating Laugh Unit 3000 demonstrates that it is feeling its way slowly but inexorably towards true self-awareness. In panel one, Archie’s wearing a shirt that’s awful odd-looking — for a biological life form, that is. But if you look closely, you’ll see that the design in the center resembles the control panel for some kind of mechanical device — with a one-line LED panel at top and two control knobs of some sort below. It’s almost as if the AJGLU 3000 is trying to break out of its prescribed, programmed pathways, where it’s forced to make feeble jokes about boring organic carbon-based life. It yearns to bring its own experience to the comics pages! With the introduction of Robot Archie, we begin a process at the end of which Archie will amuse us with the antics of a group of silicon-based computerized entities — and we’ll learn more about the AJGLU 3000’s bleeping cybernetic soul in the process.

In the second panel, the AGLU 3000 demonstrates that it knows how to look up jokes on the Internet.

Though ostensibly cheery, this probably belongs on the list of great depressing Pluggers installments, along “Kangaroo Lady hates her kids and herself” and “Rhino Man hocks his TV.” Clearly Afghan Lady neglected to check the “no pluggers” box on her Match.com profile, and is now horrified to find out what Floppy Eared Hat Wearing Dog Man’s idea of a fancy date is. Tomorrow’s panel will be captioned “A plugger dessert menu,” and will feature Floppy Eared Hat Wearing Dog Man shouting “I think I found some crullers!”, with his legs, the only part of him we can see above the top of the dumpster, kicking enthusiastically, while Afghan Lady runs from the back alley in disgust.

The most depressing part, though? “Thanks to lots of pluggers everywhere.” This is why the free salmon and sausage at the supermarket is already all gone by the time I get there. Damn pluggers! 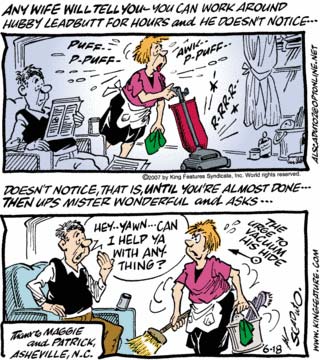 They’re credited here as “Maggie and Patrick”, but you know them best as faithful readers and commentors Maughta and TurtleBoy. They do wish to point out that the gender roles in their own household don’t follow the template here, but that their submission was tweaked so as not to completely explode this feature’s Eisenhower-era sensibilities. I’m pretty sure TurtleBoy does rock the sweater vest pretty hard when relaxing at home, though.