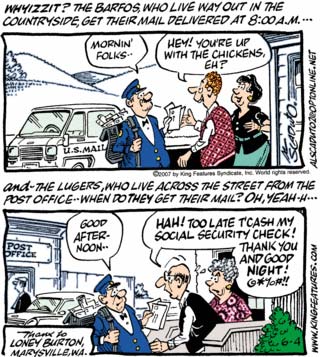 As a freelancer, I have a kind of … relationship with the postal service. Traditionally, most businesses pay their freelancers via paper checks, sent through the mail, rather than via the direct deposit that most folks with 9-to-5 jobs (and, for that matter, Social Security recipients) can get. Plus, you can never really be sure how quickly some of your clients are going to pay you (past speed isn’t always an indicator of future performance). Some of my biggest clients have in the past couple of years finally switched over to electronic payment, but I still get enough money in the mail that I’m always a little bit anxious about when it’s going to arrive.

Thus, in my six years as a freelancer, I admit to being a little bit of a mailbox hoverer. Especially when I lived in apartment buildings, in urban areas where the mail carrier and his or her schedule was likely to change from day to day, the game of “Is the mail here yet?” was a fun one to play, and gave me a little chance to walk around a bit, get out of the apartment (if not actually outside in the fresh air), and, occasionally, open my mailbox and find a check. It was a little like playing a slot machine, except I didn’t have to pay any money. And, once in a while, I admit to griping (to myself, of course, since I almost never encountered the mail carrier in person, and would never be mean to them if I did) that a check had arrived too late for me to take it to the bank that day.

Then I moved in with my wife-to-be, which also marked the first time that I lived in a real house (as opposed to an apartment) since I graduated from high school. This move also meant that I lived two doors down from Bill. Bill is a bachelor retiree, and is a very nice and helpful guy; he’s got spare keys for everyone in the neighborhood, and he brings in packages if you’re not home. He also has something of a … relationship with the mail, more for something to do than anything else, I imagine. The problem was that his relationship started interfering with mine. Because Bill watches everyone and everything in the neighborhood from his front room, he’s very much aware of when the mail gets here, and, more to the point, when I was looking to see if the mail had gotten here. If I opened the door to check, before I could even open the mailbox, I’d hear, “Not yet, Josh!” from two doors up.

For a while, this really bothered me. The “Is the mail here yet?” gig was my obsessive game! How could I enjoy it if Bill kept interrupting me? Eventually, though, I made peace with it. In fact, I like to think that seeing Bill’s obsession with the mail allowed me to let go of my own obsession a little bit, to realize that if a check sat in the mailbox for a couple of hours, and didn’t get cashed until the next day, it would really be OK.

Plus I figured out that I could see the mailboxes across the street from our living room, and thus didn’t even need to go outside to check.

Anyway, my larger point here is that I feel a tiny bit of resonance with Old Man Lugar’s attitude here, although like every TDIET character he takes it to a place of horrifying bitterness and negativity, cursing at an underpaid worker who probably does not, in fact, draw up his own duty schedules. I would like to say that it’s probably best to keep on the good side of someone named “Luger” if at all possible.

Mailman Beasley is getting a similar bit of blowback today, but since he rightfully doesn’t perceive Dagwood as any sort of threat, he responds not with terrified cringing a là TDIET but with passive aggression.

Never mind Newt Gingrich’s attempt to psych himself up to murder in panel two; what the hell is the deal with that giant forearm in panel one? The perspective makes it look as if the elbow to which it’s attached must be hovering somewhere around Captain Poor SAT Verbal Score’s thigh. My theory is that it’s been hewed off of a Bob’s Big Boy statue and bolted permanently to the floor of the ship’s bridge, as only such an enormous fiberglass hand could properly hold the gigantic sandwiches that these seamen crave.

I really hope that this isn’t how a lot of law enforcement and intelligence gathering works — “Sure, it would actually be faster to just look at one of the arrival boards, but that would mean we wouldn’t have a chance to intimidate someone by flashing our badges!” — but I fear that this might be one of Dick Tracy’s more accurate installments.

Dear Herb and Jamaal artist checking to see if anyone at the syndicate is actually reading your cartoon to ensure that it makes some vague sort of sense before sending it on to the newspapers: Sadly, nobody appears to be doing so.

Update: It’s apparently a black thing that I didn’t understand. Point withdrawn, though the punchline is still pretty convoluted.