All day, people have been commenting in varying degrees of arousal about the hot, hot Miss Buxley action in today’s Beetle Bailey. All I can say is: why? The Walker oeurvre is one of the funny pages’ more stylized, and there are few less detailed or realistic looking “sexy” women in comics than General Halftrack’s oft-harassed secretary. Seriously, if this was all it took to get me worked up, I’d just draw a stick figure and slap some boobs on it and WHAM! Instant porn. Even the theoretically sexy frilly unmentionables are terribly botched, with Buxley’s brassiere seemingly wrapped around her robe, implying that either that the artist has little grasp of spatial relations and/or undergarment topography, or that she’s dressing quickly because she’s aware of the series of hidden cameras the general has stashed all over her apartment and wired up to the phone somehow.

The less said about whatever’s in her robe pocket, the better. Is it a hot glue gun? Or something more untoward There’s something about its crap-brown color that unsettles me.

Now, Heather Avery — that’s a cartoon character whose sex appeal I can endorse. I don’t even care about those little droopy devil horn things on the front of her head, which indicate that she’s probably a succubus in addition to being a gold-digging nanny and stock-manipulating white-collar co-conspirator.

This whole encounter is more than a little porntastic. “Hugh … what is it? I’m getting dressed — and since I’m already in the process of removing my robe, surely it’s unrealistic to expect me to close it again now that it’s half-way open, since I’ll just be taking it off completely in a few minutes. Can’t it wait? The robe-closing, I mean.” Of course, since there’s no blood relation between the two of them and they’ve only met the previous day, there’s nothing untoward or incestuous about the prospect of them falling into each other’s arms for comfort in the wake of their great loss — or at least there wouldn’t be if they didn’t essentially look exactly alike. Even Von and Vera, Mary Worth’s creepy Flowers in the Attic pair, didn’t share this much of a resemblance. Of course, this has less bearing on any potential Heather-Hugh match-up and much more bearing on Milton’s now-revealed-to-be-deeply-disturbing attraction to Heather. 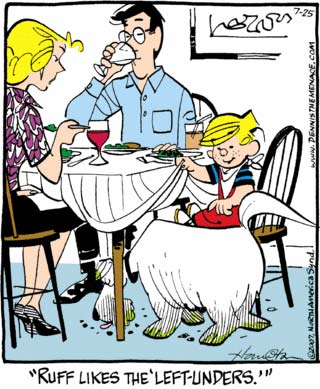 Lucky for Ruff the Mitchell’s floor is covered with a healthy layer of rotting organic matter! Of course, we can’t blame Alice for the unhygienic state of the house: Henry forces her to wear those killer stilettos at all times, so she can barely walk; I don’t know how you expect her to operate a vacuum cleaner.