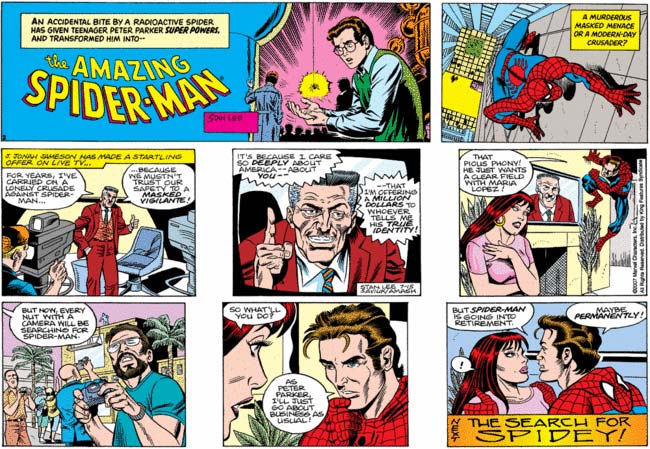 I know it gets old hearing me go on about how Spider-Man is an incredible feeb, but … Jesus Christ, Spider-Man is such an incredible feeb. Today’s he’s decided that he’s just had about enough of this terrible secret identity curse, and so he’s going to pack up his things and go retire the Spider-Man identity entirely. Here’s a hint, Spidey: Spider-Man is the interesting one — by comparison, anyway. You know who should be going into retirement? Mr. Peter “Waaaah my wife makes more than me” “Waaah I don’t have health insurance even though I have super powers and don’t need it” “Waaah I can’t reach the remote” Parker, that’s who. Does this happen to all superheroes eventually? Were Rex Morgan and Mary Worth originally crime-fighting mutants who retired their superhero personae but somehow held on to their spots in the comics pages? Because Peter Parker sans Spidey could out-dull either of them.

I do like the leftmost panel in the bottom row, though, which dramatically illustrates the insane mob of camera-wielding maniacs that would surely drive even the most powerful superhero into seclusion. “Look, there’s a guy on the roof — he might be Spider-Man! Photograph, photographers, photograph!”

However, in the long run, even the usually reliable NEXT! box disappoints. Is that Papyrus font? Sheesh. 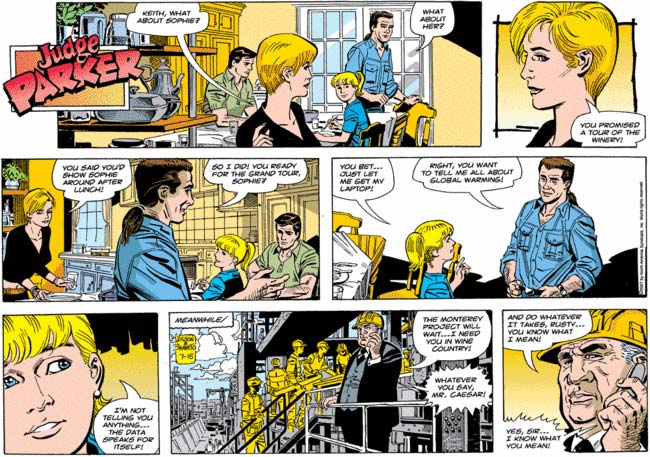 You can tell Mr. Caesar is a bad guy, because he wears a full three-piece suit when he goes to inspect his sinister industrial operation, which probably exists solely to transform crude oil directly into global-warming-causing CO2 without even refining it into useful gasoline first, because he’s just that evil, you see. So also clearly this “Rusty” will have something really awful in store for Sam and Sophie. I’m guessing that when he makes his arrival tomorrow (tomorrow in Judge Parker time; actual date: June 3, 2008), he’s going to look a little something like this:

“GEEEAAHHH!” Sam will say. “YOU CAN HAVE OUR SHARES IN THE WINERY — JUST STOP POINTING THAT FACE AT ME!”

Sophie, meanwhile, is so worked up about environmental disaster that her left eyeball is rolling into the back of her head. It’s kind of freaking me out.

“Wait a minute … damned souls, trapped in trees and begging to be urinated on? Packed swimming pools full of boiling water, with the scent of cooking human flesh wafting over the whole neighborhood? That’s not ‘the past’ … those are my fantasies about the torture of my enemies in hell! Sorry, I’m old, I get things mixed up sometimes.”