“I found the legendary Marg-Po idol in a monastery high in the mountains of Qinghai province, just like the old man at the museum said. The monks said that its mystical power was the only thing that could defeat Margo. It seems crazy, but I think it’s our only chance.”

Welcome to phone sex, Mary Worth-style. That means it’ll take a year and a half, will take place at impossible angles on hideously colored sheets, and everyone will lose interest about a quarter of the way into it.

Man, I could just watch hungover Hugh stand absolutely still and blink very gingerly all day. It’s kind of hypnotic. The next three weeks of this strip could just be Hugh blinking as the storyline is advanced by word bubbles coming from off-panel. They could call it The Angriest Hungover Brit in the World.

Possibly the most depressing Shoe ever. I think they’re finally figuring out that if they’re going to have Roz responding to punchlines with huge-eyed horror, they need to make those punchlines truly horrifying. 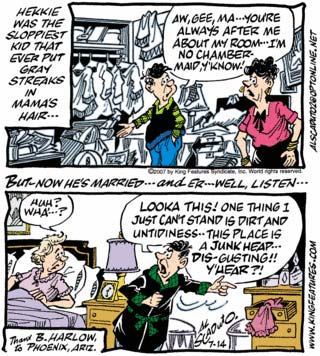 That … that is something they’ll do every time, actually.

Boring technical update: Apologies to everyone whose comments were eaten by the new spam filter over the past few days. I know it’s really frustrating, but believe me when I say it’s also been really frustrating for me to try to figure out how and why it’s happening and how to fix it. I switched back the other filter program; hopefully it won’t cause the site to grind to a halt again or start eating comments like it was doing last week. (For those of you who are computer nerds: I had switched from Spam Karma 2 to Akismet and now back to SK2. If you have any words of advice, I will appreciate them.)

On thing that will definitely increase your chances of getting caught in any kind of spam filter is adding a bunch of links to your post. So, I’d advise you not to do that.