Look, I love bacon cheeseburgers. And I adore tuna casserole. And my diet is pretty dodgy, and errs in the direction of the greasy, as those two previous declarations would indicate. And even I’m kind of appalled by today’s FBOFW. It never really occurred to me that these would be two great tastes that go great together, possibly because of some residual instinct of self-preservation. And if I did choose to combine these artery-clogging treats in a single meal, I probably wouldn’t make burgers that were literally the size of dinner plates. I don’t want to judge. But I guess that’s what I’m doing.

You’ll note that despite Ellie’s good mood, there’s a tear running down her cheek in panel two. My guess is that her circulatory system is weeping in anticipation of its coming suffering. Also, sadder than any other aspect of this paean to cholesterol is the look of pure unmediated joy on John’s face in the final panel. It’s as if he’s finally discovered a reason to live again — one that will kill him in short order, ironically.

OBH’s mom is caught in a moment of repose in panel one. And by “repose”, I mean “utterly soul-sapped exhaustion,” obviously. The look on her face and her body language pretty much say, “Please, God, take me now so I never have to deal with my children’s ADHD-driven antics again.” Thus, the dire violence on tap in panel four is, if still probably against the law, at least well set up in the strip’s narrative.

Yesterday’s encounter between Alan and Jones the beatnik, in which the latter opined that he “might have just what you want”, followed by today’s episode, in which Alan claims to have been “riding high” and now needs to start making “amends”, all combine to imply one thing: we’re going to get an “Alan the recovering substance abuser” storyline written entirely in scarcely veiled code and innuendo, apparently to shield the bluehairs who fainted in droves during Mary Worth’s Tommy the Tweaker storyline. Look for Alan to have a meaningful conversation with Lu Ann in which he claims to have “thrown out all of his ‘junk'” and to be “no longer interested in ‘riding the white lion,'” winking at her all the while, then saying “wink” aloud to reinforce his point. 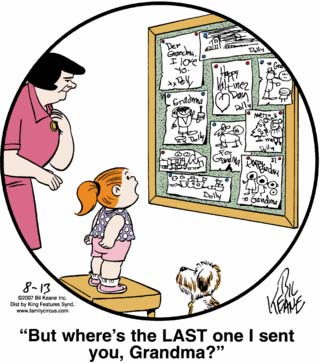 The way Grandma is nervously fidgeting with her collar implies that Dolly is more of a threat than her short stature and low IQ would suggest. “People who don’t hang up all of my art get the CORNFIELD!”