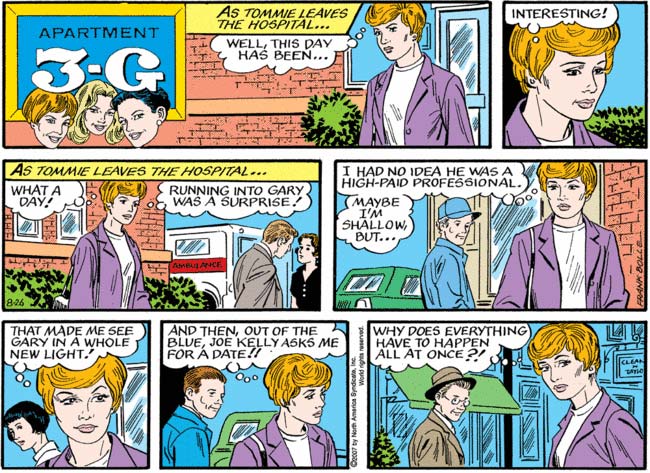 Oh my God, Tommie is a whore! And I don’t mean this in the usual misogynist sense of the word, implying that women who enjoy sex, perhaps with multiple partners, are to be stigmatized, while men who engage in similar activities are subject to manly approbation. No, I mean this literally, in the sense that her decisions about sexual activity are entirely determined by the possibilities of financial recompensation. Struggling theater dork? No! Moneyed computer dork? Yes! We see how it works, Tommie. All those people who keep sizing her up as she walks around thought-ballooning aren’t looking at her ass or seeing if she has toilet paper on her shoe; they’re thinking, “Can I afford her?” 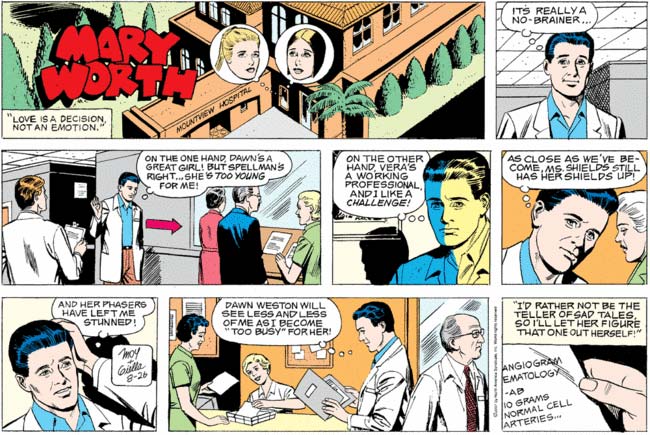 Speaking of thought balloons, panel one of today’s Mary Worth, in which Dr. Drew spends an idle, distracted moment (possibly during surgery) imagining the severed heads of his two girlfriends eyeing each other suspiciously, is one of the greatest things I’ve ever seen.

I’ve been disappointed before by the soap opera comics (most recent example: the pathetic, deflated end to the initially so, so promising “Coach Kaz, P.I.” storyline in Gil Thorp), but I can’t conceive of circumstances under which the next few weeks of Mary Worth aren’t going to be absolutely hilarious. The Love Doctor uses his patented passive-aggressive-minus-the-aggression heartbreaking technique on Girlfriend #1, while firing on all cylinders to overcome the challenge of getting into the starched panties of Girlfriend #2, and both #1 and #2 live in the same building? Comedy gold, I tells ya. Of course, if any of his past, present, or future conquests find out that he conducts internal monologues about his love life studded with elaborate Star Trek metaphors, he’ll never have sex again.

Sunday’s Dennis the Menace is mostly unworthy of mention, except for this horrifying glimpse of a young Mr. Wilson, who resembles nothing so much as a pompadoured gnome.

And hey! A big shout-out to faithful reader Matt, who recognized me tonight when we were both attending and enjoying the latest Charm City Roller Girls bout. I’m pretty sure that this was the first time I’ve been spotted in public someplace where I hadn’t announced in advance that I’d be there (i.e., my weekend in NYC a couple of months ago doesn’t count). My wife actually has been recognized before, but then she leaves the house a lot more often than I do. Matt says he doesn’t post comments, but you may remember him as the recipient of a charming Aldomania-themed birthday greeting.