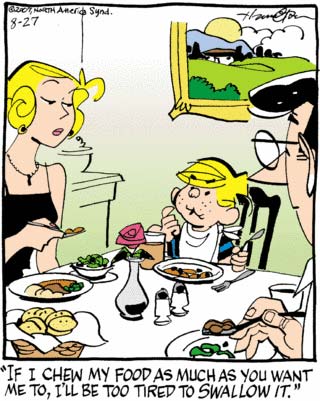 It’s not particularly hard to parse the look Alice is giving Dennis in this panel — I’m pretty sure that something along the lines of “Fine, don’t chew, you’ll just be all the more likely to choke to death so we can be free of you” is running through her head. The fact that she’s wearing a black cocktail dress adds to her aura of icy disdain, but it seems kind of out-of-place at a family dinner for just the three of them. Perhaps this is a glimpse into the alternate-reality version of the strip, Dennis, Viscount of Stokington? That would explain the ultra-formal attire: the whole noble family is supping at their seat, Menacing House, with Henry, the 16th Marquess of Forth and Stoke, despairing that his unruly heir will ever be considered cultured enough to follow in his footsteps to Eton and Oxbridge. 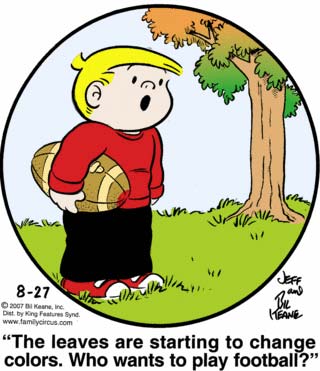 Hooray for the coloring gnomes, who apparently noticed that the caption here makes reference to “leaves … starting to change” and actually colored the leaves in the background accordingly! That doesn’t forgive the obvious and unexplained dollop of red at the end of Billy’s football, however. The ball is too blunt to stab anybody with, so presumably our little towheaded psychopath killed an innocent in some other way, then dipped the football in the spilled blood, hoping to thereby gain totemic power.

Great Jesus Christ, do I want to know why Mary was apparently sitting on Dr. Jeff’s lap while he was doing something “tiresome” at the computer? Or why she has that bizarre, fixed smile on her face? Leaving Jeff to go to bed in what appears to be the middle of the afternoon? Please, take us back to Dr. Drew, with his Star Trek-themed three-way fantasies, I’m begging you.

I’m assuming that “– you know — life” is code for “the facts of life” which is in turn code for “the basics of human sexuality and reproduction.” Momma’s clearly right to pick her battles, as nobody, least of all us poor readers, would want to see the how her core values on sexuality — that any woman who has sex before marriage, or enjoys it afterwards, is no better than a common harlot — would be received. But maybe a bit of an explanation would have made things better for her son. 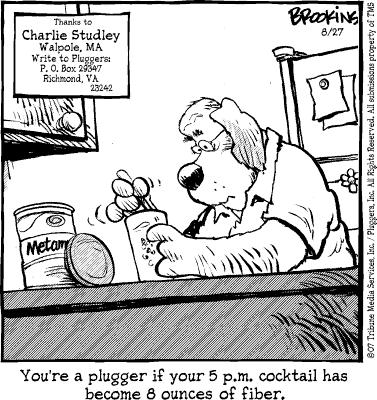 Normally I just snicker immaturely at pluggers from my elevated position as an East Coast cultural elitist, but today’s installment strikes me as quite poignant. As our plugger hero stirs with furrowed brow, he almost seems to be saying a little prayer: Please, Lord, let me poop tonight. Please. I try to be a good person. I think it’s been nearly a week.