So, well, uh, I guess my hopes that this might be interesting, or make any damn sense at all, have pretty much been dashed at this point. Way to hold up under pressure there, Cliff. “I didn’t do it!” “We followed you!” “Aw, hell.” I am pretty impressed by Gail’s look of unbridled rage there in panel three. You do not want to get on the wrong side of the rock and roll Carole King, I tell you what. I guess the real lesson here is that shady dudes with Fu Manchu mustaches and a record of drug offenses are actually pretty cool guys! They sure wouldn’t leave passive-aggressive notes scattered around; they’d just insult you to your face.

(But it still doesn’t add up! With the money he earned touring, Cliff was able to buy a van! A van!)

Meanwhile, smack dab in the middle of the future site of the Lost Forest Hot Topic, Homer the friendly construction worker is about to take a stand to protect some baby ducks from the ravenous jaws of your so-called “progress.” It should come as no surprise that our duck-loving bulldozer operator is clean-shaven, while the stench of evil rising from his coworker is as thick as his no doubt matted beard. Fortunately, Mark Trail will soon be on the scene to explain what he learned from Sam Hill: once the developers finish draining the wetlands, birds won’t want to lay their eggs there anymore, and the problem is solved!

The following sentence is one that I never, ever wanted to write, but I suppose in retrospect it was inevitable, so here goes: The frank sexuality in today’s Momma is deeply disturbing to me. It’s already been implied that Francis fancies himself a ladies man, much to Momma’s disgust. Presumably she assumes (no doubt with good reason) that Francis’s inability to hold down gainful employment probably indicates that he’s unable to operate a prophylactic, and that she has dozens of bastard grandchildren all over town. You’d think she’d be a little excited about the prospect: grandkids are usually idée fixe #1 of the Mommas of the world; she’s got none to brag about down at the senior center, other than little Chucky, who hasn’t appeared since his fateful trip to the bar with Francis, when he was presumably traded for beer. 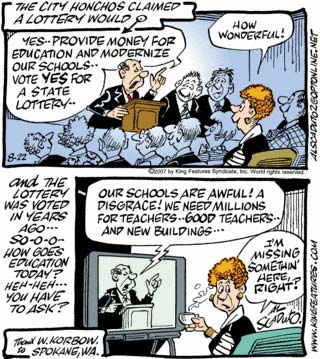 I’m not going to touch the political content of today’s TDIET (“Public education: A necessary institution in an equitable society, or an insatiable money pit?”). Instead, I’m going to outline the lottery-themed TDIET I’d like to see:

…but then who d’ya see on TV trying to get you to put a buck on the Big Payoff Lottery Scratch-Off? Do you have to ask? I don’t think so!

(“Million-to-one odds … and you could be that one! Why not cash your Social Security check to buy more? Every dime goes to education! Etc … etc …”)

OK, now they’re just fucking with us, with the hair.