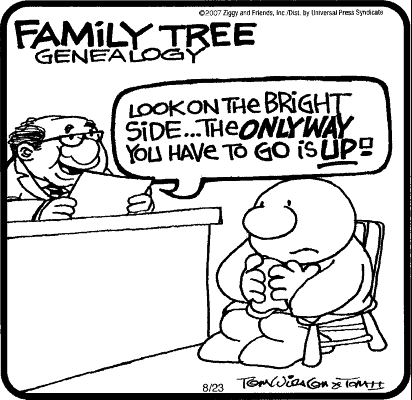 Ziggy always looks depressed, but he’s got a particularly traumatized expression on his weird, mushy face today. He’s sitting in that chair with a death grip on his little hat and a thousand-mile stare like he’s just received some terrible, terrible news. I’m not exactly sure what product or service brings one to the “Family Tree Genealogy” store/office/otherwise featureless room where a guy sits behind a desk; presumably you pay them money and they look up the same stuff on the Internet that you could have found for free in ten minutes if you weren’t a moron. Anyway, getting back to the mysterious little drama here, obviously Ziggy’s just been given some terrible news about his family, though I’d be hard-pressed to come up with what exactly a genealogist could say that would get you as worked up as our lovable loser is here. “Hmm, now where did I put your file … ah, here it is, Ziggy Hitler! Well, I have some interesting news about those European relatives…”

Apropos of nothing except that it’s simultaneously funny and horrifying, faithful reader Dub Not Dubya sent me this picture of a blobfish, which really more accurately should be called a Ziggyfish. 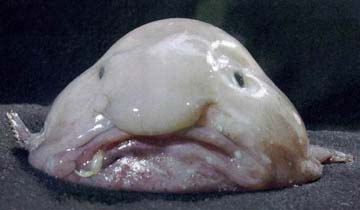 So, after robbing a bank, the Shocker is literally just standing around patiently surrounded by piles of money, waiting for the press to arrive, putting his fists on his hips so as to look as confidently villainous as he can once the cameras capture him. Of course, the press consists of erstwhile lovers J. Jonah Jameson and whatshername, the Romulan chick who now has a crush on Spider-Man; any supervillany is sure to be outshone by their squabbling. The only way Spider-Man can find out about all this is if he does the one thing most ingrained in his nature, but which he has sworn not to do: turn on the television. I think it’s safe to say that Spider-Man has finally given up and embraced camp.

Oh, I do not like the look on TJ’s face in panel three. It’s one of discomfort, just starting to edge into outright pain. Is there a sharp, broken spring burrowing into someplace tender? Has Brad not actually sat in the chair? Did he make TJ his first test subject in an act of passive-aggressive revenge for the years the Teej has spent undermining his life?

Actually, now that I look at it again, it could just be flat-out rage. If there’s one thing TJ hates, it’s uncomfortable chairs. Don’t you dare offer him anything less than cushy … if you know what’s good for you.

Desperate to make Elizabeth stop talking about Anthony — as any decent, normal person would be — Candace finally just changes the subject to herself in panel four.

The whole “Thérèse is an awful bitch” storyline is somewhat undermined by the fact that Anthony does, in fact, look like a fool in panel two. Nice jams, dude! Was 2003 the equivalent of 1988 in metric Canadian years?