There’s just one thing wrong with … no, wait, scratch that. There’s one thing that’s immediately obviously wrong with the latest offering from the Archie Joke-Generating Laugh Unit 3000: Andrews père apparently considers a wallet to be something comfortable to settle down on, instead of a painful ass-irritant that any normal person would remove before plopping down in a big comfy spiral-covered chair. Of course, the AJGLU 3000 is a soulless collection of wires and semiconductors, so it can probably only dimly understand how physical comfort works. Perhaps it has concluded that something customarily placed in a back pocket must by definition be comfortable to sit on. It also has only a loose grasp on human biology, as evidenced by panel three: that tiny bald head is perched atop an impossibly spheroid body, which, being composed of some perfectly pliable substance in the AJGLU 3000’s internal volume map, merely oozes around the wallet without any discomfort.

The AJGLU’s defense, I will admit that the images on the screen in the background — funny-looking men! pretty girls! cars! — demonstrate a perfect grasp of the concept of television.

So, if, before today, you had asked me, “Josh, which of the unfunny recurring gags in Crock do you find most disturbing?” I’d have answered without hesitation, “The cook’s conversations with the chickens he boils alive, who are wholly sentient and all too aware of their impending horrible fate.” And if you had asked, “Well, is there any way this could be made more disturbing?” I’d probably have said, “Nope! It’s pretty grim!” And if you had then followed up by saying “But what if you found out that the flesh and fat and skin of these chickens were being used to flavor soup while they were still alive, which soup was then consumed by eager humans right in front of their death-haunted eyes?” I’d have said, “Huh. Yeah, you’ve managed to top it, all right.”

And today’s nominee for Use Of Quotation Marks That Is Most Unsettling For Reasons I Can’t Quite Put My Finger On: “Isn’t peppermint your ‘favorite’?” The little floating musical note only adds to the unease. 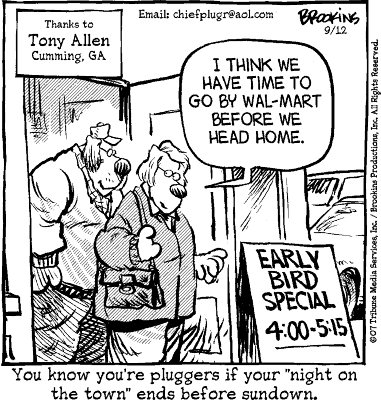 UPDATE: So, as Sherm was the first to point out, vampires like the night, not the day. I’m, like, dumb.