People! Do you recall that I told you some weeks ago about the glory and majesty of Mark Trail Theater, a genuine Mark Trail-simulating performance in which your humble blogger would appear? And that it would be part of a larger variety show called Glitterama that would include many other acts that you would find amusing and amazing? It has come to my attention that many of you live within easy reach of Baltimore, and yet have not acquired tickets! This post will give you an opportunity to rectify your oversight! The details, again, for those that missed it:

(Since I encourage the dramatization of Mark Trail in as many media as possible, I must point out that an entirely separate group of kindred spirits already do Mark Trail Theater … on the radio!)

Speaking of acting out comics: The unstoppable mother-daughter team of faithful readers that is Rainbird and Huntinbyrd felt that last Thursday’s Mary Worth cried out for a re-enactment. I think you’ll find the results both delightful and unsettling, just as I did: 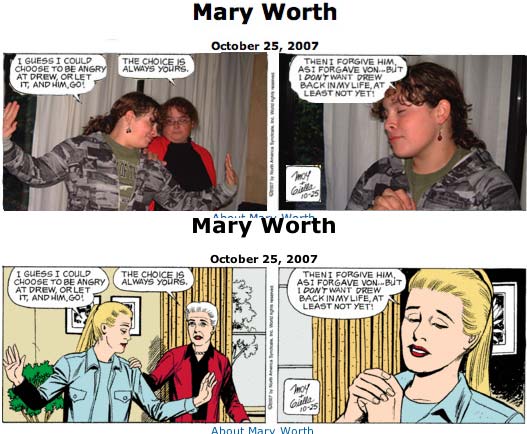 And finally, faithful reader Toonhead has taken those bizarre body angles and karate-chop motions that we all know and love so well from Mary Worth and to their logical extreme by editing them together and adding 1974’s smash novelty hit “Kung Fu Fighting” as a soundtrack. Enjoy!