Uh-oh! In a totally shocking unforeseeable development, it seems that vaguely repentant “accidental” murderer Cully Vale is falling in with a bad crowd! That Mitch “found” that money in some old lady’s purse is obvious not least because he appears to be an Eisenhower-era greaser hood of some sort. Meanwhile in panel two Boyd Henry’s Chameleon Device briefly hit some kind of glitch, revealing his black, alien eyes. What sinister plan does this disguised extraterrestrial have for Cully, and for humanity? Only time will tell!

Cully is too dumb recognize any of the warning signs, obviously. He’s not even very in touch with the way his own body works. “Hmm, discomfort in my tummy … what could make grumbling go away? Food? Sure, food sounds great! I’ll try this ‘food’ of which you speak!”

Most of the comics are starting in on their Halloween stories this week, but none have offered a vision as terrifying as Johnny Malotte’s litter of spawn and their eager, smiling faces. It’s frankly a wonder that Mom can even sit up straight after pumping out this brood. I’m guessing the visiting businessmen will find this group of hillbilly Von Trapps more unsettling than enjoyable.

And yes, Johnny has facial hair, but he’s an “old friend” of Mark’s, so he gets some kind of pass. Based on his Captain Renault-style mustache and vaguely Frenchy last name, I’m going imagine him as a comical Quebecois outdoorsman for really no good reason. 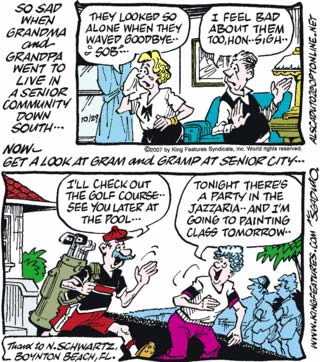 I’ll never forget the day I first visited my Great-Aunt Ruth and Great-Uncle Stan in their retirement community in the high desert about an hour outside of L.A. I was fourteen or fifteen at the time, and while I intellectually understood why they found the golf course directly adjacent to their backyard appealing, I was more impressed by the constant round of barbecues and cocktail parties — any time of day, any day of the week — that their lives had become. I quickly understood why everyone got around the streets of their little subdivision on golf carts and the speed limit was 15 miles per hour: because pretty much everyone had a buzz on all the time. Ever since that day, I’ve had one goal in mind: to retire in style. Thank you, TDIET, for reminding me to keep my eye on the ball.

*SPUT* *BLUB* DO NOT TELL ME THAT THIS IS HOW THIS STORY HAS BEEN RESOLVED. IT DOES NOT WORK THAT WAY.

Sam is wearing his sunglasses to bring Extra Dickishness Action to this little conversation.

Ha ha! It’s funny because Hi and Lois are bankrupt! 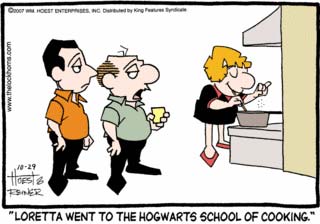