Woo! At long last, something exciting is happening in Judge Parker! Exciting and … completely nonsensical, but what the hell. I’m pretty sure that the reason I haven’t been able to follow the business and legal machinations of this plot is because they’re complete twaddle, as is Rusty Duncan’s incomprehensible Sam-lust. You might as well get all hot and bothered (and stupidly risk your high-powered lawyer career) over a particularly handsome slab of wood for all the satisfaction you’ll get out of it. One hopes that this isn’t a tiresome “lady professionals lose their mind over a hot hunky man” plot but rather part of some wheels-within-wheels intrigue, with hidden cameras ready to put this cute little scene all over the Internet. The handkerchief is there to collect a bit of Sam’s blood that will spurt from the gashes she’s about to tear in his ear; this will be useful for later DNA testing to prove that the photos depict her kissing the real Sam and not a life-sized Sam mannequin (since it would obviously be hard to tell otherwise).

I guess Vera’s line about “see[ing] the stars at night” is supposed to be some kind of reference to their first starlit make-out session,” but it’s pretty much impossible to interpret it as anything other than “Drew brought me to levels of physical pleasure that Von could never reach.” And maybe it’s me, but I really don’t think you should be talking to Mary Worth about the quality and quantity of your orgasms. It just seems wrong.

Not that I’m a big expert on the minutiae of Archie characters’ inner lives or anything, but in my experience the Coach Kleats mainly doesn’t express any emotion other than numb-eyed acceptance of the wackiness and incompetence surrounding him. Thus, his Bob Knight-style tirade at a reporter’s legitimate (if ludicrously vague) question is kind of surprising. Presumably he’s desperately trying to prevent the press (and the readers) from noticing whatever it is number 7 is about to do to number 11 in the first panel.

Typically, Milford teams are good enough to make the playdowns (AND YES THEY CALL THEM “PLAYDOWNS” IN GIL THORP DON’T ASK ME WHY ALL RIGHT?), but then inevitably flop in the first or second round. It’s good to see this year’s football squad breaking that mold by descending into total incompetence. Pretty soon a desperate and/or bored Gil will put in the team’s fourth-string quarterback: the kid with one leg. The only sad part is that Marty Moon is apparently too drunk or not drunk enough to launch into the “Fire Gil” campaign that he usually gets rolling at the first sign of trouble in the Milford Athletic department.

Panel one makes it clear that Coach Kaz is still battling his troubling addiction to cosmetic surgery. 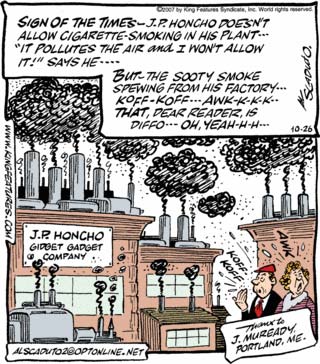 So when he builds his sprawling mansion with his eight-digit bonus check, does he put it downwind from his own factory? Oh, dear reader, need you ask?

“Somethin’ about the country air … so fresh and clean … sure it’s far from the plant, but it’s worth it for the ol’ lung-quality … ahhhh …”