Hmm, perhaps I was too hasty yesterday when I dismissed out of hand the idea that there might be some tension between the A3G narration boxes and the actual narrative. How else to explain panel one, in which we are told that our fearsome foursome are “on the way to the tavern” when in fact they are very obviously standing around in Apartment 3-G’s blandly decorated living room and not going anywhere? The only way they could be less going to the tavern is if they were out on the street walking away from the tavern, though that would be harder to convey in the limited panel space here.

On the other hand, the sudden transition from blinding white to inky black in the second panel is evocative of some kind of movement. Maybe the Professor has whipped up some advanced transporter device, and we’re seeing them walk through a hole in space-time to emerge safely on the tavern’s front steps without having to encounter Manhattan street riff-raff. Or maybe there’s just an entrance to a Prohibition-era secret passageway behind the girls’ kitchen cabinets that connects to every gin joint in town. 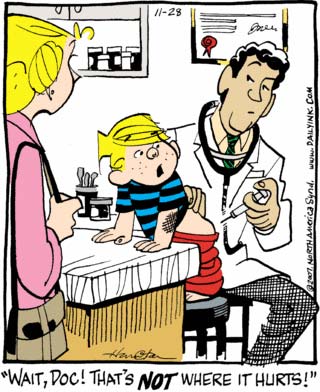 I think this is the first time I’ve ever seen Dennis with a look of obvious panic on his face; I guess it’s also the first time I’ve seen him with his pants down. I’ll stop going further down this incredibly inappropriate road because I mainly wonder how this can be worked into the increasingly awesome The Luck of Dennis St. Michel, Viscount Stokington. If you ever doubted that the combination of Dennis the Menace and Regency pastiche would be completely hilarious, this blog should put your mind at rest.

Man, I thought Mary was cold-hearted over the past few days as she allowed him to believe that she had some gentleman caller over so that he’d run over and fight for her honor. Now she continues to thrust her hound at her erstwhile not-lover as the latter’s respiratory passages begin to seize up. The question now is: who will win this battle of wills for Mary’s heart? Chester’s cuter, but Jeff is probably marginally smarter.

In panel one, Mary is waving Chester’s little paw at Jeff to give some veneer of respectability to her blatant attempt to thrust the dog’s genitals in the good doctor’s face.

I’d say that this is supposed to be some sort of commentary on how secular iconography is displacing the true religious significance of the Christmas holiday, but this is the same strip that had town tramp Tiffany playing the Virgin Mary in this pageant. Luann headquarters is lucky that it isn’t a smoldering, lightning-struck hole right now.