I’m the sort of guy who always looks on the bright side of things. Take, for instance, the bursting of the housing bubble in the United States. Sure, it’s causing a lot of problems for anyone trying to sell their house, as well as those employed in the housing and construction industries — and the associated implosion of the subprime lending market is probably going to destroy the world economy and have us eating old turnips and beans out of a can by 2009 — but, thanks to the recent (in legacy comic strip terms) move to have Lois of Hi and Lois get a job as a realtor, it adds a nice occasional note of contemporary desperation to this otherwise bland and hoary feature. Sure, today it’s gimmicks like apple pie and cash incentives, but surely it won’t be long before Lois has to choose: either she offers her lovely fortysomething body as a “sweetener” to close the deal on an exurban four-bedroom, or she has to decide which of the twins gets to go to college.

Hmm, Mark seems to have decided to challenge Rex Morgan for the coveted Dick of the Month Award. He’s finally getting around to finding out whether or not Bull Malone has any surviving kin — not because he gives a rat’s ass about how bereft they are over having just lost a handsome and successful loved one, who, for the record Johnny Malotte obviously killed — but because he’s trying he’s trying to find some other poor sap on whom to hang this cold-blooded murder. Obviously Andy was brought along for his expertise in evidence tampering.

Mark is allowed in Johnny’s holding cell because of the sacred bond of Outdoorsman Advocate-client confidentiality. Mrs. Johnny is there because the schedule for spawning more raven-haired Malotte offspring cannot be altered by any mere legal proceeding. I note also that Johnny has been allowed to keep his suspenders in the clink; perhaps the local authorities hope that he’ll save them the expense of a trial by hanging himself with them. 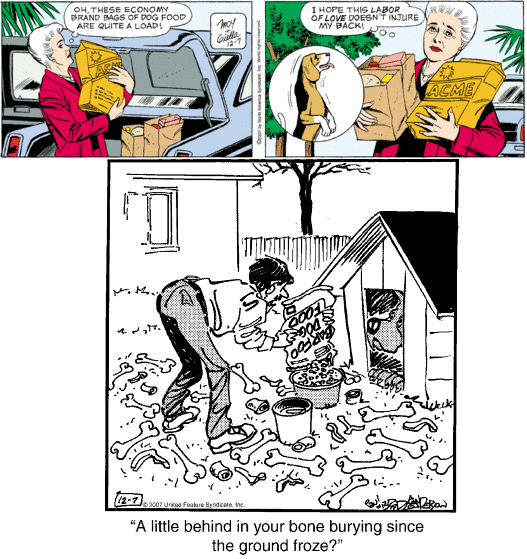 Good Lord, could Mary get any smugger? Even her fantasies are thick with loathsome self-regard, as she imagines Chester positively vibrating with delight at the sight of the largest, cheapest bag of dog food she could find at the discount supermarket. On the other hand, at least ACME dog food is probably just bland and lacking in nutrients, as opposed to the actively disgusting BARFOO food that Marmaduke’s owner is feeding him. Of course, Mary claims to actually like Chester, whereas I have to imagine that Marmaduke’s owner’s attitude towards his enormous, destructive pet is a toxic mix of hatred and terror.